Jakub Kornfeil, the Czech rider of the PrüstelGP Team conquers the first position on the starting grid at Brno Automotodrom. Front row for John McPhee and Marcos Ramírez too.

The first pole for a Czech rider since 2007 (with Lukas Pesek in Misano), the first pole of a Czech rider in the Czech Republic, the first personal pole position: Jakub Kornfeil managed to implement the right strategy and won the leading position on the starting grid in his homeland’s circuit. John McPhee is 2nd, and Marcos Ramírez 3rd, while Fabio Di Giannantonio finished 5th despite staying on pole for most of the round.

The Italian rider of Del Conca Gresini Team soon took the lead, followed by Canet and Rodrigo. Sasaki suffered an high-side at the very beginning (he was taken to the Medical Center for checkups, where he was declared fit despite a slight lameness in his right leg), soon followed by Suzuki’s crash. The situation remained stable for a long time, also because of the extremely high temperatures that have been hitting the Czech track since the first day, making the round much more complicated.

Arenas finished the session with a fall, while many other riders got a chequered flag trying to stay in the right wake to improve their lap times. Only a few of the guys managed to actually improve, but enough to completely change the starting grid: the pole position went to Jakub Kornfeil, who will be kicking off 1st tomorrow for the first time in his career.

John McPhee and Marcos Ramírez will be filling the rest of the front row, while Philipp Öttl got the 4th position ahead of Fabio Di Giannantonio and Aron Canet. Gabriel Rodrigo arrived 7th ahead of Nakarin Atiratphuvapat, Niccolò Antonelli, and Enea Bastianini. 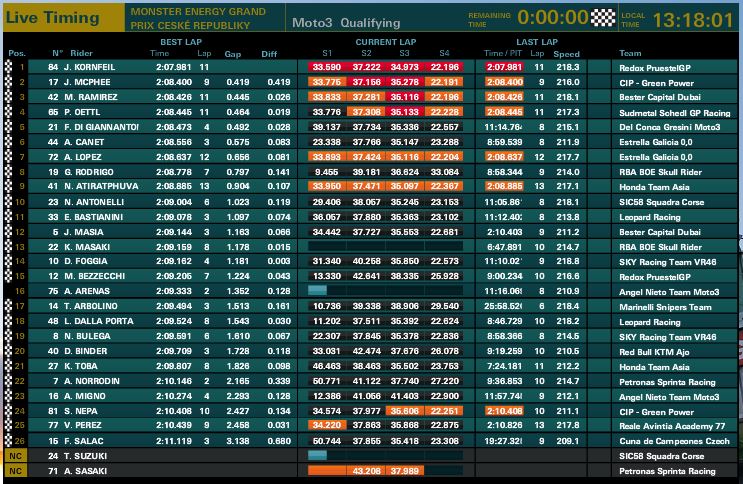