John McPhee and Jeremy Alcoba protagonists in the Moto3 race, until an accident that saw them come to blows. Race direction sanctioned both for the next GP.

In Moto3 once more we saw a hard-fought and unpredictable race. Unfortunately, however, there were also several accidents. One of these (above) saw protagonists Jeremy Alcoba and John McPhee (and Darryn Binder, who remained in the saddle) up to that moment in good evidence in the leading group. Unfortunately, this is nothing new for the Scotsman. He has fallen down several times because of various opponents’ mistakes. This is probably what sparked the spirits and saw the two riders come to blows. 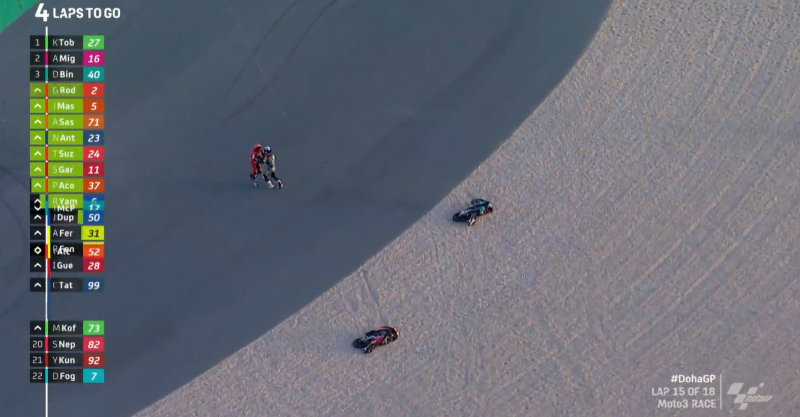 An episode that obviously did not go unnoticed and that led to some consequences. Both have to pay a fine of € 1000. But a second penalty will affect their Portuguese Grand Prix a lot. The Indonesian Racing Gresini Moto3 rider will start five seconds after a normal start from the pit lane. Time that doubles for the Petronas Sprinta Racing standard-bearer. McPhee will also start from the pit lane, but 10 seconds later than the normally scheduled start.

“A shameful reaction“, as stated in the press release from the Gresini team. “I am very disappointed” added Alcoba. “I made a mistake also dictated by Binder’s manoeuvre. I’m sorry because we had a great weekend.” On the Petronas side, “Really sorry for John,” commented Johan Stigefelt. “He rode well. Again another rider threw him out. It is unacceptable.” Sure very disappointed McPhee. “Another driver’s mistake,” bitter admitted. “Everything was going well up to that moment. Obviously, I’m sorry. I have let my emotions get the better of me“.

Moto3, Pruestel GP presents its bikes and riders for the upcoming season

Gresini Racing unveils their new liveries for Moto2 and Moto3

Moto3, Boé Owlride shows up, here are the 2021 colors for Rossi and Nepa