Jorge Martín rules over the race, but it’s Marco Bezzecchi’s 5th place that eventually gives him the World Champion crown in Moto3. Lorenzo Dalla Porta and Enea Bastianini step on the podium too.

Jorge Martín’s Malaysian weekend ends with a double victory: he won the race but, thanks to Marco Bezzecchi’s 5th position at the chequered flag, he is mathematically the new
king of the lightweight category, just one race before the end of the season. This young and talented rider worked really hard for this result and he gave great reasons to deserve this title. Hats off for his rival too, as the Italian rider was the real surprise in this season. There are also two other Italian riders on the podium, as Lorenzo Dalla Porta closed the race 2nd ahead of his teammate Enea Bastianini.

The track was still wet due to this night rainstorm, but the overall situation was relatively dry: this very important race, in terms of World Championship ranking, could start in decent conditions. The poleman Martín performed an excellent start, but his main rival for the title of World Champion, Bezzecchi, did even better. At the first turn, the latter got a good chance to overtake the Spanish rider, but it’s clear that the battle for the podium will be a hard-fought one involving plenty of riders. Some withdrawals have to be signaled too: the first was that of Vietti, who did a great race before crashing; then that of Pérez; and then that of López, McPhee and Foggia who all fell down in the same accident.

There were also a number of other contacts that luckily didn’t lead to any serious consequences. The two main rivals in the battle for the World Champion title slightly hit each other too, and they showed us a fierce battle that fired up 10 laps before the end of the race. But we eventually lost another rider in the leading group, Canet. The local rider Norrodin performed an outstanding comeback, as he started from the pit lane but managed to climb many positions up until he reached the top 10 thanks to a long series of very fast laps. But he didn’t get his happy ending: the Malaysian rider slipped 3 laps before the end when he was already 7th and closed the race last.

Jorge Martín puts the word “end” to the battle for the 1st position, just a few laps before the chequered flag. He started accumulating more and more advantage over his rivals and he literally flew to a new success. Marco Bezzecchi’s final result, despite his hard-fighting attitude until the very end, closed the game for the title of World Champion: the Italian rider got a 5th place that gave the Spanish rider the right to start celebrating his first victory in a World Championship. The two forerunners of the Leopard Racing team, Lorenzo Dalla Porta and Enea Bastianini, got the other two steps of the podium, while Albert Arenas is 4th. Fabio Di Giannantonio crossed the finish line 6th followed by Darryn Binder and Tony Arbolino, while Tatsuki Suzuki and his teammate Niccolò Antonelli (still recovering from a double injury on his back and foot) took up the remaining positions in the top 10. 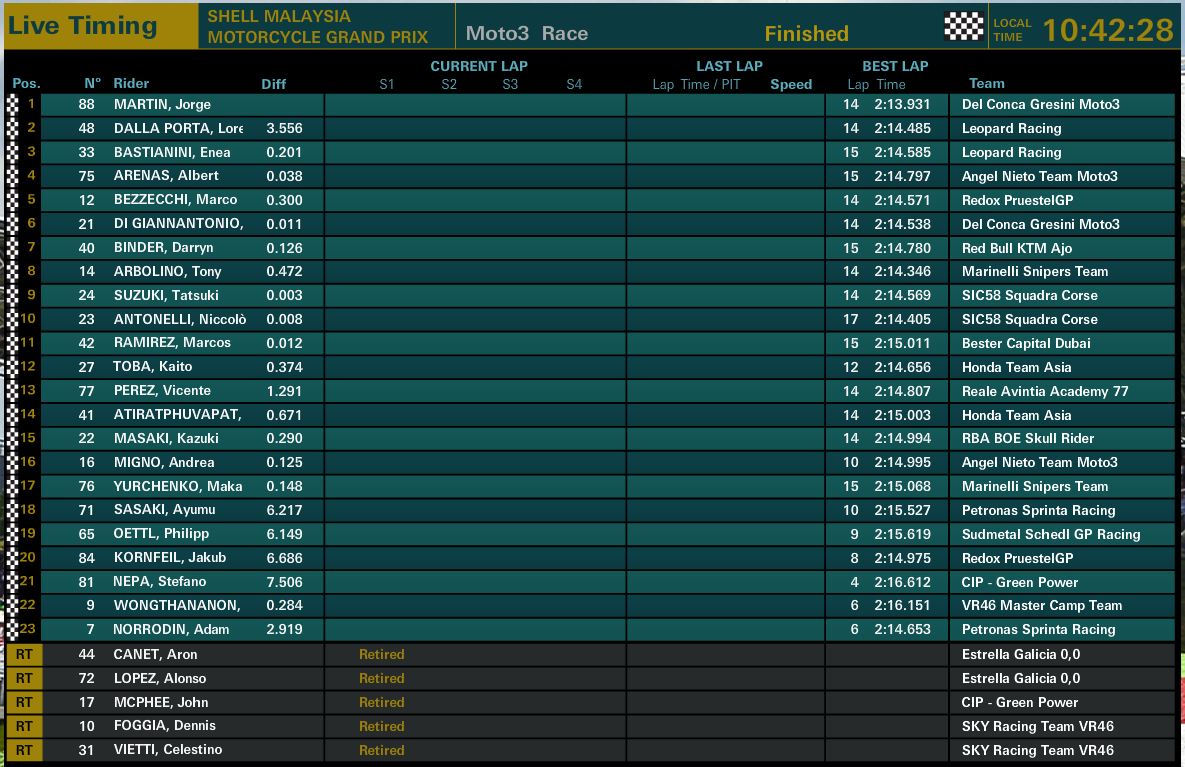