Jorge Martín wins another pole position, and he also makes a new track record. Marco Bezzecchi is 2nd: we all expect a fierce battle during the race.

A hard-fought Qualifying round to win the best position on the starting grid, but with the same uncontested leader: Jorge Martín gets a new pole position. This is a very important one, as on Sunday he will have the chance to win the World Champion title. Marco Bezzecchi will do his best to stop him, and he is in the best position to do so as he will be kicking off right next to him on the front row. Tony Arbolino got the 3rd place on the starting grid.

Before the beginning of Qualifying, track conditions were definitely better compared to this morning, but the sky was still cloudy, and the rain was ready to pour. All riders immediately went down the track, but Canet stood out first. Unfortunately, he also slipped after temporarily getting the 1st place. The ranking stabilized in the second half of the round, with a good 2:12.786 registered by McPhee ahead of Martín, Arbolino and Di Giannantonio. After a short break at the pit lane, all riders went back on track to fight harder for the pole position.

It was a great battle until the chequered flag, but the leading name we can read on top of the ranking is always the same: that of Jorge Martín. He will be kicking off from the pole position again tomorrow, followed by his main rival for the World Champion title Marco Bezzecchi. Tony Arbolino filled up the last position on the front row, while John McPhee will be opening the second row, followed by Albert Arenas and Enea Bastianini. Tatsuki Suzuki got the 7th place, ahead of his fellow countrymen Kazuki Masaki and Ayumu Sasaki, while his teammate Niccolò Antonelli took up the last position in the top 10. 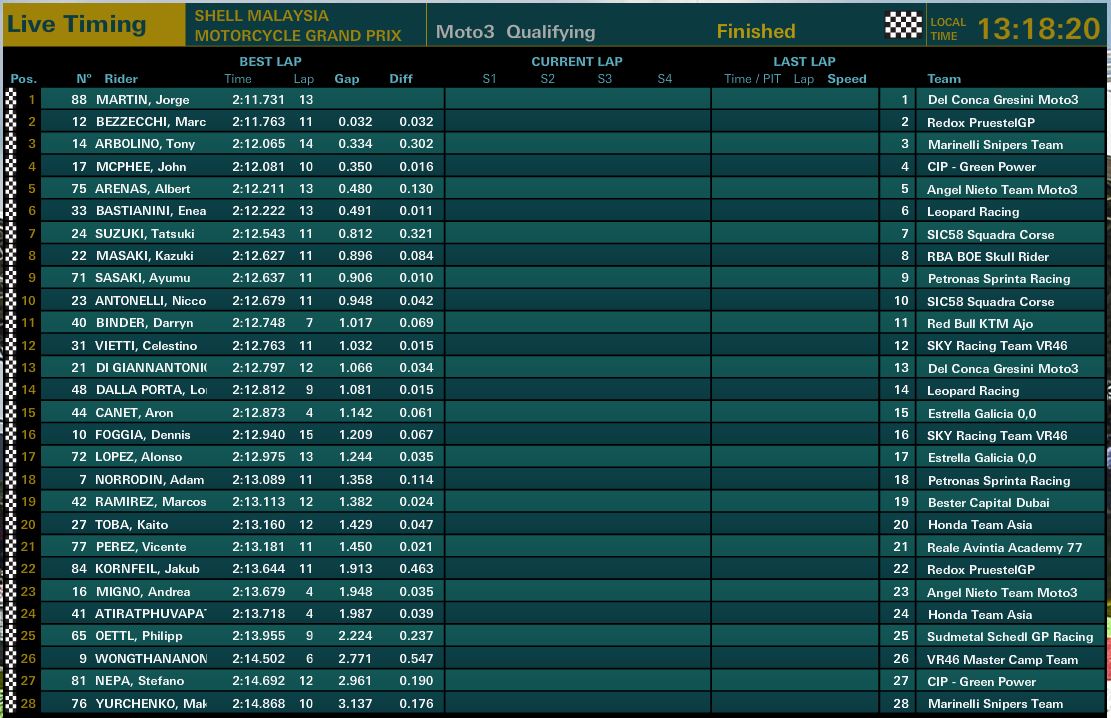