Jorge Martín left his mark on qualifying in Silvertone , followed by Masià and Dalla Porta, while Bezzecchi fell and ended up 11th.

Still recovering from a broken wrist after a crash at Brno, Jorge Martín takes the lead of the ranking again on qualifying, winning his 7th pole position of the season. Bu riders’ times were all very close to each other: Jaume Masiá got the 2nd place just 1 thousandth behind and Lorenzo Dalla Porta finished 3rd with a 21-thousandths’ margin. In less than a second, 18 riders crossed the finish line. We’ll see a highly competitive Moto3 race on Sunday, August 26th, starting at 12.20.

Despite the sun and the dry track, the rain is waiting just behind the corner and all riders immediately went down the track trying to register their best time. As usual, we witnessed a well-studied game of wakes, especially between Bezzecchi and Martín. The two risked a crash and had a short fight afterward. During the second half of the round, when Di Giannantonio was leading ahead of Rodrigo and Bezzecchi, some raindrops fell, and all riders had to go back to their pit lanes. In the meanwhile, Antonelli crashed after Norrodin hit him while re-entering in pit lane. In the last few minutes, as track conditions considerably improved, all riders went back for the final battle.

Both Rodrigo’s and Bezzecchi’s qualifying ended too early as they both crashed in two different accidents, despite registering very quick times. This way, Jorge Martín got a new pole position. Jaume Masiá and Lorenzo Dalla Porta filled up the remaining positions on the front row, while Arenas got the 4th place ahead of Fabio Di Giannantonio and Tatsuki Suzuki. Eventually, Gabriel Rodrigo registered a 7th-place time, followed by those of Enea Bastianini and Nicolò Bulega. The last two positions in the top 10 went to Marcos Ramírez and the World Championship leader Marco Bezzecchi. 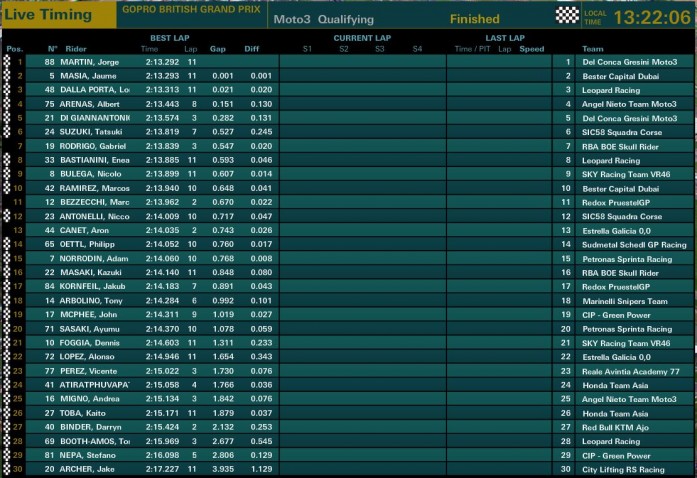