Can Öncü is the youngest GP winner ever, and he also got his first victory as a wild card. Martín and McPhee also on the podium. Di Giannantonio closes as the runner-up in Moto3.

History was written today by the junior category of the MotoGP in Valencia: at his very first World Championship race as a wildcard, Can Öncü (15 years and 115 days old) wins the last 2018 race with an extraordinary performance. He is the first rider to have won a World Championship as a wildcard since 1991, when Noboru Ueda did it in Japan. Can is also the youngest GP winner ever (defeating Jack Miller). Aki Ajo and the Red Bull KTM Ajo team can be very satisfied, as they hired him for the next season, while his twin brother Deniz cried at the end, after having been tense for the whole race until the chequered flag. On the podium also Jorge Martín and John McPhee, with Fabio Di Giannantonio 4th and runner-up. Jaume Masia is the Rookie of the Year.

Arbolino kicked off amazingly, followed by Bezzecchi, Öncü and McPhee. Not a great start for Atiratphuvapat (last in the top 10), and an initial three-riders fall that involved Dalla Porta, Canet and Suzuki (the latter fell and took the others down with him): only the Italian rider managed to re-enter the race. Soon after, also López crashed, and Foggia couldn’t realize his dream of becoming Rookie of the Year as he slipped during one the first laps. Öncü almost fell too, but he managed to avoid the crash; the same can’t be said of his teammate Binder, who fell but managed to continue racing. 20 laps before the end, an unexpected turn of events changed the situation in the top positions: Bezzecchi fell badly and had to re-enter the competition from the 22nd place risking the loss of the runner-up title.

Arbolino and Öncü were then leading the race, clearly doing something extraordinary: the Italian rider is the quickest on track and registered an amazing 1:51.172; while the 15-years-old Turkish rider made an only slightly longer time. Both riders kept an outstanding pace on the wet track. An intense battle for the 3rd step on the podium fired up behind them, involving Di Giannantonio (who saw the chance of becoming second in the Championship), Martín and McPhee. Arbolino’s dream ended halfway through the race, when he suffered a high sideon Turn 4 that left him out of the game. Bezzecchi lost every chance as he slipped again, right in the middle of the race: “Bez” managed to get back on his bike but he is out of the points’ ranking.

The very young and amazingly talented Turkish rider Can Öncü gained a historic victory today: this was his first World Championship race before the official debut as an official rider for the 2019 season. The 2nd place went to the current World Champion Jorge Martín (who dedicates his title to Luis Salom and Andreas Pérez), and the 3rd to John McPhee, ahead of the runner-up Fabio Di Giannantonio. Enea Bastianini closed his last Moto3 race 5th, ahead of the Rookie of the Year Jaume Masiá. Niccolò Antonelli ends his season with the 7th place, followed by Nakarin Atiratphuvapat (who says the last goodbye to the World Championship), Marcos Ramírez and a great Celestino Vietti, again in the top 10 at his fourth World Championship race. 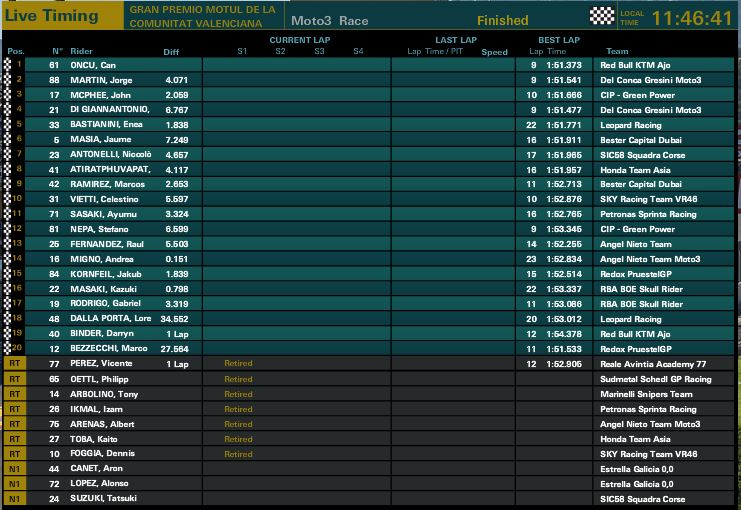 MotoGP, El Diablo wins in comeback. Zarco and Martin behind him