Tony Arbolino is ready to race the last GP of the season kicking off from the pole position: the right timing in changing to slick tyres eventually gave the upper hand to the young rider of the Snipers team. He will start from the front row for the second time this season, after Argentina. A great day for Nakarin Atiratphuvapat too, who won a nice 2nd place and will be sharing the front row with John McPhee (3rd). Can Öncü won an excellent 4th place, missing the front row by a whisker. This will be a lively race, starting at 11 AM on Sunday, November 18th.

The round began on a wet track, but it didn’t rain and with time the conditions definitely improved. The round didn’t start well for Nepa (this is his last race in a World Championship, as for now he still doesn’t have a bike for the next season), who slipped after just a few minutes. The same happened to Bezzecchi, who fell immediately after registering the best provisional time. Many riders crashed at the beginning of the round, when the track was still wet, but some others fell toward the end too: Ramírez, Migno (who had to take his destroyed bike back to the pit lane), Öncü, Vietti, Arenas, López, Rodrigo, and Antonelli all slipped. Some of the rookies stood out today: in particular, the Red Bull Rookies Cup champion who is clearly ready for the next season; but Atiratphuvapat was as good as them.

As usual, during the last few minutes, we saw the combative final assault for the pole position. The track was almost completely dry and there was an endless line of red helmets. Eventually, Tony Arbolino won the first position on the starting grid with an impressive series of extremely quick laps (thanks to newly changed slick tyres). Just behind him, there are Nakarin Atiratphuvapat and John McPhee. Can Öncü closed Qualifying with a great 4th place, followed by Aron Canet and Marco Bezzecchi, with Marcos Ramírez 7th ahead of Jakub Kornfeil, Albert Arenas and Raúl Fernández. 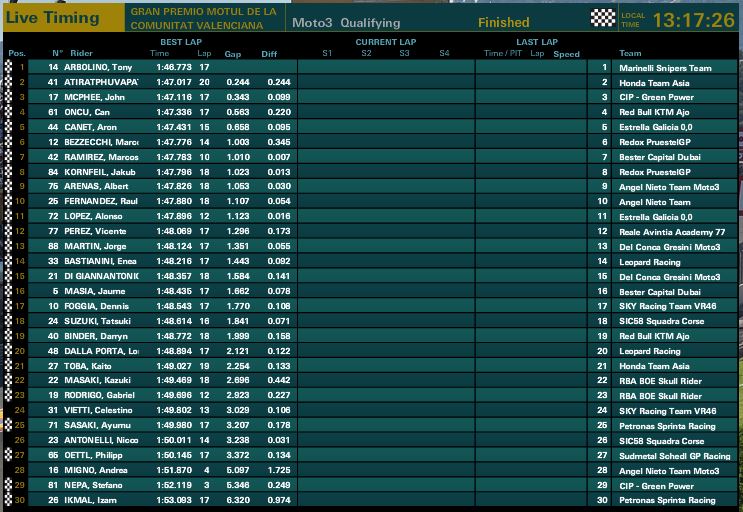