Most Important, MotoGP
June 17, 2018 by Diana Tamantini
0
After Mugello, Jorge Lorenzo did it again in Catalunya: the Ducati rider kept an unreachable pace and finally he scored his second win in a row on the Ducati. The man from Mallorca crossed the line four seconds earlier than Marc Marquez (who tried to win on hard tyres), while Valentino Rossi ranked third. No finish for Andrea Dovizioso, involved in one of the many crashes we saw (just 13 riders made it to the end…).

At the beginning Marquez took the lead followed by Andrea Iannone, the Ducati pair, Rossi and Dani Pedrosa. While wildcard entries Mika Kallio e Sylvain Guintoli crashed, Marquez, Lorenzo and Dovizioso escaped. The trio soon became a duo, as Dovizioso crashed out with 15 laps to go.

Lorenzo held an incredible pace (between 1:40.0 and 1:40.4 for most of the GP) and Marquez struggled a lot to stay close to him. More retirements to be reported: Xavier Simeon, Takaaki Nakagami, Bradley Smith, Franco Morbidelli and Hafizh Syahrin crashed, while Alex Rins and Tito Rabat had technical issues. The latter had to leave his bike in flames at Turn 1, after that the engine broke. 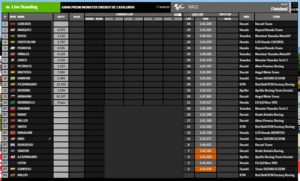