Headline, Insights, Most Important, MotoGP
2 weeks ago by Paolo Schmutz
0

Ducati had won only once in Jerez, with a double from Capirossi and Gibernau. It was 2006, and today Jack Miller and Pecco Bagnaia repeat that MotoGP feat, also interrupting the lack of victories in this early 2021. The Australian was looking for the turning point of the season and here comes the first amazing victory as an official rider in red. There is a double smile at Borgo Panigale with the # 63 in second position, while behind it is remarkable the 3rd place of Franco Morbidelli, best Yamaha rider and best rider also in the private team. But we also underline the great race of Takaaki Nakagami, of Joan Mir (with a less than optimal tire), of Aleix Espargaró. Unfortunately, there were some incidents, more than unexpected arm troubles for Quartararo.

Almost unique choice of front and rear medium tires for the riders of the premier class of the World Championship. However, the three of them decide to take a risk with the front soft: as you can read in the table, they are Viñales, the rookie Bastianini and the reigning champion Mir. And as we will see, it is a gamble that does not pay.

Alex Márquez‘s race ends straight away, down at turn 8. Too bad also for Binder, best KTM so far and with a GP soon compromised by accident, even if he manages to restart. Before being the protagonist of a new crash that forced him to retire. Slide and restart for Rins, same speech for the rookie Bastianini, who unlike the Spaniard will be forced to abandon the race.

Miller almost promised it, today he did it: an excellent start for the Ducati rider, who immediately takes the lead with Morbidelli and Bagnaia in tow, while Quartararo loses a few squares. while paying attention to Espargaro’s Aprilia, which as he had claimed immediately remained in the top 5. A few laps and Quartararo took the lead, starting to hammer an impressive pace that also led him to rewrite the new race record several times. But be careful, because Miller is holding up behind them. In fact, from the middle of the race onwards we see more and more guys from the Ducati factory team.

He never gave up Miller, but also Bagnaia constantly goes up, with Morbidelli lurking behind his compatriot. Fabio Quartararo, who appears increasingly in difficulty and loses one position after another, even falling out of the top ten. But the fasting of victories is interrupted at the beginning of 2021. In fact, Ducati does an encore: Jack is released Miller, second step for Pecco Bagnaia. Great Franco Morbidelli 3rd. Not bad even Takaaki Nakagami by far the best Honda rider. As well as Aleix Espargaró, constantly fighting between the first and 6th at the finish. 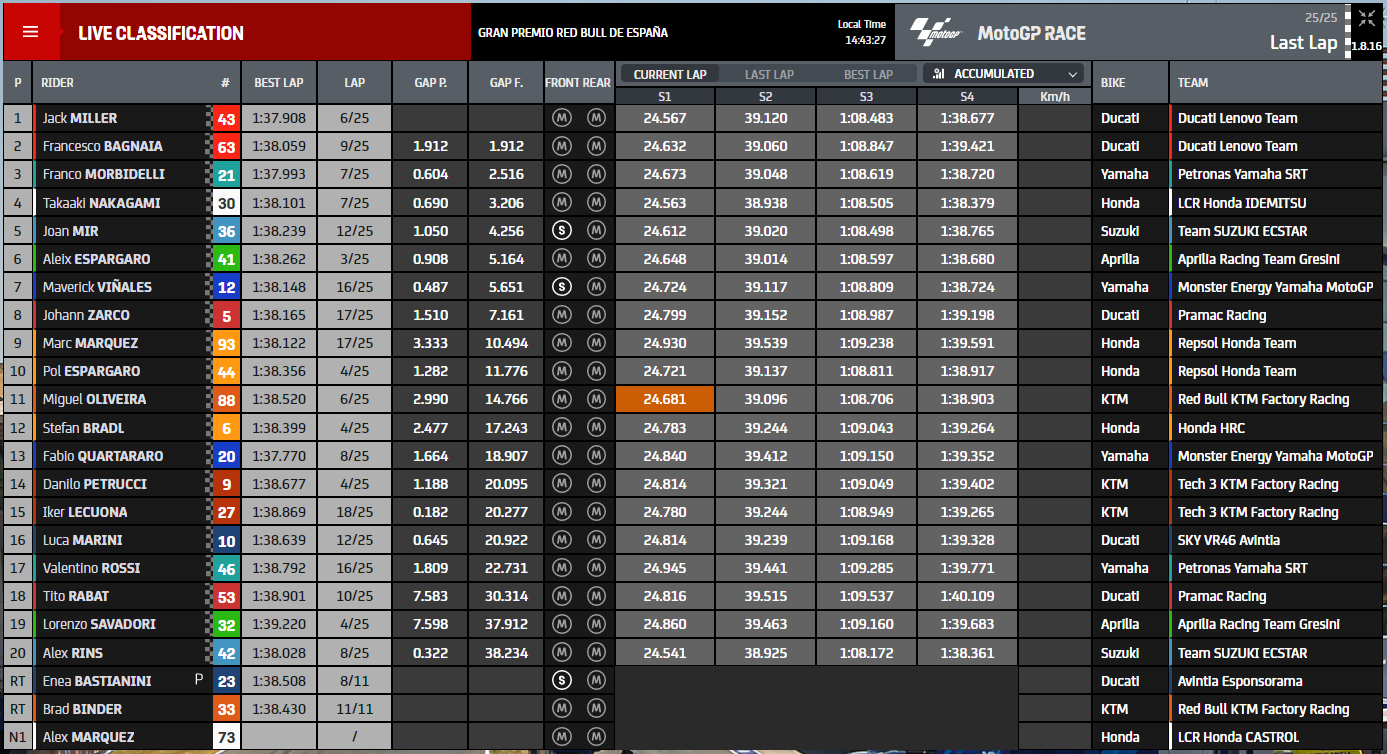