Despite the shoulder surgery he underwent last December, Marc Márquez was the fastest man on the track during Sepang Test Day 1. The reigning World Champion said that he can’t do more than two or three laps in a row. However, it was enough to set the best time of the day, as he performed one lap in 1’59.621. Second place went to Alex Rins (Suzuki), while Maverick Viñales took his Yamaha M1 to third position. Tomorrow, the second day of testing will start at 10am local time.

MANY NEW PARTS FOR KTM – More or less, the teams are all working on the same areas for 2019, but currently, the most hard-working manufacturer is KTM. The business based in Austria took to Malaysia some updates concerning engine, fork and electronics, plus a new exhaust, a new fuel tank and a new race seat. The aerodynamic profile has changed as well, as there are some winglets, which are similar to the ones used in the past by Honda and Yamaha. The test hosted at Sepang is crucial also for Yamaha, as the Japanese squad must find the best setup for 2019 engine, chassis and electronics.

SOME MORE TROUBLE FOR ANDREA IANNONE – After missing the Shakedown due to a physical problem, Aprilia Racing’s Andrea Iannone had a crash today in the morning, as also Jack Miller (Alma Pramac Racing) and Pol Espargaró (Red Bull KTM Factory) did. However, the Italian put in a good number of laps today, despite still suffering some toothache following a plastic surgery. Both Iannone and his team-mate Aleix Espargaró struggled in the opening day. 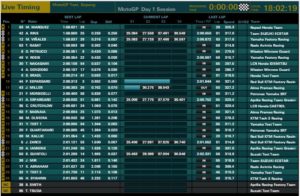