Today Petronas Yamaha SRT presented its new bikes for this MotoGP season live on youtube. We could also see Valentino Rossi with his new suit for the first time along with his new teammate Franco Morbidelli.

This morning Petronas Yamaha SRT went live on youtube to present the riders for this MotoGP 2021 season and also their bikes. A lo of guests spoke, starting from Razali and some sponsors to all the riders.

First to speak was team principal Razlan Razali who thanked FIM for the great work they are doing to contain the pandemic and also he spoke about the great importance that fanbase has for the Malaysian team. “During this year we achieved a lot of goals, such as poles, fastest laps and also wins. We arrived second in our second season in MotoGP” said Razali. Even sponsors defined PYSRT success as phenomenal and extraordinary.

Johan Stiegefelt, team director, said: “We have had a great season in Moto3 with McPhee and I have big hopes for the upcoming season. Also in Moto2, we showed that we have potential and that we can be at the top with both riders. I’m very confident about this year“. He added that it will be a challenge to continue the streak of great results that they achieved in 2020’s MotoGP season.

Xavi Vierge stated: “I hope to fight for the top positions from the beginning this season and also fight for the championship. We don’t have to make mistakes, because the others don’t do anything special more than us”. Jake Dixon said that he wants to “Get in the flow again and maybe get on the podium and win some races. Of curse I want to win the championship but that comes after“. He also said that his aim is to avoid crashes and be more consistent. Both Moto3 riders, McPhee and Binder, said that they are excited for the new season but they have to score more points and improve qualifying.

Finally we could see the new bikes which are very similar, in terms of livery, to last year’s. Valentino Rossi said that it’s a new challenge for him. But PYSRT has shown that it can do great things. Morbidelli said: “I am very excited to ride again my M1. Hopefully as soon as possible. I like a lot the people in the team as I’ve been here for a long. I’m looking forward to share the box with Vale“.

A smiley Valentino Rossi told us that he likes his new colours. He also said that he is proud to be a part of this team. He said: “My goals are to be competitive again and fight to win races. It will be fun to ride the same bike but in a new team“. He also spoke about his relationship with his teammate: “We always train together and challenge each other with different bikes. We have a good relationship and we know each other well“. 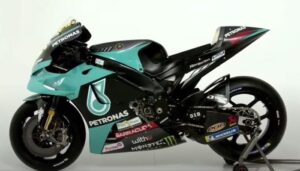