It was since the Dutch GP back in 2017 (with Valentino Rossi) that Yamaha didn’t win the highest step on the podium. But in Australia, Maverick Viñales managed to break the fast and won the race at Phillip Island circuit. Andrea Iannone and Andrea Dovizioso stepped on the podium together with him, while Rossi got only the 6th place and Marquez had to retire after crashing with Zarco.

Since the race light went off, we had a long series of very exciting moments: many riders reached the first turn in couples, with Petrucci being the best until he made a bad mistake that forced him to take a long ride out of track. Miller, Marquez, Dovizioso, the two Suzukis and two Yamahas seemed the most hard-fighting riders today in Australia, but not the only ones at the beginning: we had another battle in “Moto3 style”, with a large number of riders involved. After a few laps, here you are the first unexpected turn of events: at the end of the main straight, Zarco violently hit Marquez on the rear and suffered a terrible high-speed fall (luckily with no serious consequences), while the current World Champion’s bike suffered some damages and he had to withdraw from the race.

The other unexpected turn of events was the final battle for the podium steps, with the leading characters being the two official Yamahas, the two official Ducatis and the Suzuki riders. The group of riders fighting for the top positions then went down to 5 when Maverick Viñales managed to gain a large advantage, first of some tenths and then up to some seconds. This way, the Spanish rider broke a fast for Yamaha that had been lasting for 25 races and won the Australian GP ahead of Andrea Iannone and Andrea Dovizioso. Alvaro Bautista got an amazing 4th place with his GP 2018, followed by Alex Rins and Valentino Rossi; while Jack Miller got the 7th place ahead of Franco Morbidelli, Aleix Espargaró and Bradley Smith. 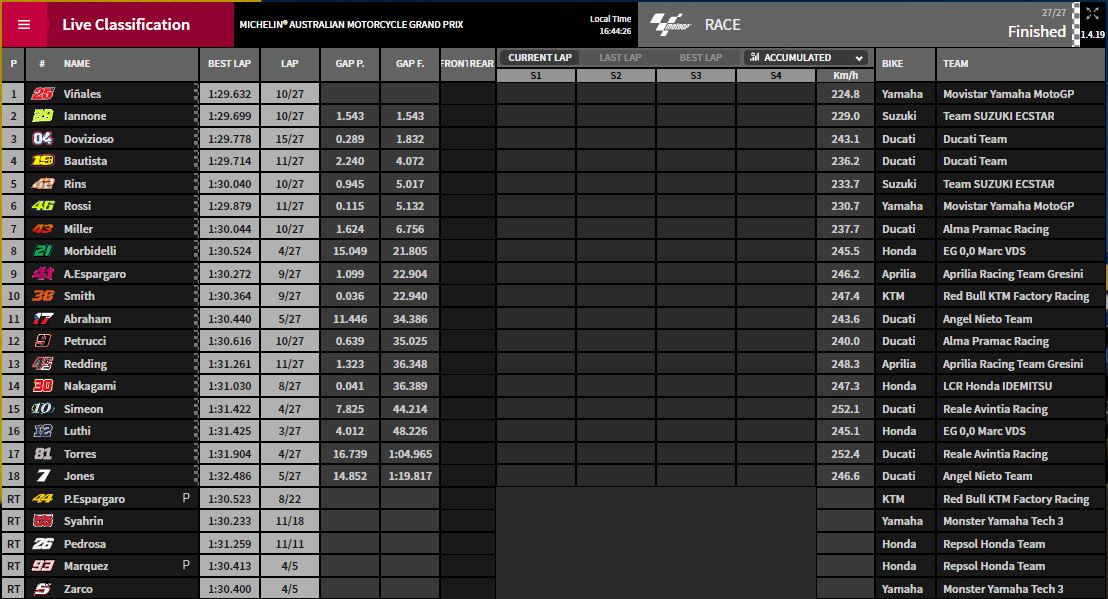 MotoGP Qatar, here is the ‘new’ Viñales. “No risks behind Fabio, then…”