A clear victory for Fabio Quartararo, who commands with authority up to the checkered flag. Great race of Pecco Bagnaia 2nd, Joan Mir completes the podium.

A start to the season clearly marked by the Yamaha. Third success for the house of the three tuning forks, a second race that bears the signature of Fabio Quartararo. From FP4 the French driver appeared to be the one with the best pace and did not disappoint: a not optimal start, but he quickly got back to the lead, finally managing to escape and obtain a solo success. What a Grand Prix for Pecco Bagnaia, second in comeback from 11th place on the grid. Who knows without that record lap removed… A third-place finish for the reigning MotoGP champion Joan Mir, an excellent fourth place for Franco Morbidelli, top ten also for the rookie Enea Bastianini. The heroic 10th place of Takaaki Nakagami, started from the back and very sore from the bang of the last few days, was applauded.

It’s a great start for Zarco, who immediately took the lead ahead of Rins, but also watch out for Márquez 3rd, closely followed by Miller and Mir, with Quartararo losing a few squares. What a start for the aching Nakagami, 14th after a start from the bottom for having skipped qualifying, not bad even Binder 8th in a few corners, but Viñales crashed to 20th position very badly. There is no lack of thrills for a contact between Márquez and Mir, fortunately without consequences. But the Cervera driver soon starts to lose some positions… Pol Espargaró’s race ends prematurely: with 21 laps to go the Catalan returns to the pits, something is wrong with his RC213V and he has to stop. KO shortly after also Miller, who loses control of his Desmosedici on the straight between turns 2 and 3. A disaster also for the house idol Oliveira, on the ground at turn 14. He starts again, but his race is compromised. Eleven laps to go and he also greets Rossi, his difficult race ends in the gravel of turn 11.

After the many upheavals in the first laps, we have a quartet in the lead, initially intending to escape. But lap after lap Quartararo and Rins, to the sound of new circuit records, prove to have a little more, so much so that they are able to accumulate more and more margin on Mir and Zarco in the first place, with the Morbidelli-Bagnaia couple just behind. Twist with 7 laps to go, with Rins hammering record laps before slipping! What a pity for the Spaniard, his race ends here. But Zarco is no better, with the podium in his hands and he too ended up in the gravel! In the lead Fabio Quartararo escapes, who commands with confidence and secures his second victory of the season. Tighter fight for the remaining podium positions: Pecco Bagnaia and Joan Mir above all, with Morbidelli lurking and Binder on the comeback. But in the end, it is the Ducati rider who takes a fantastic second position, while the Spanish rider finishes on the third step of the podium. 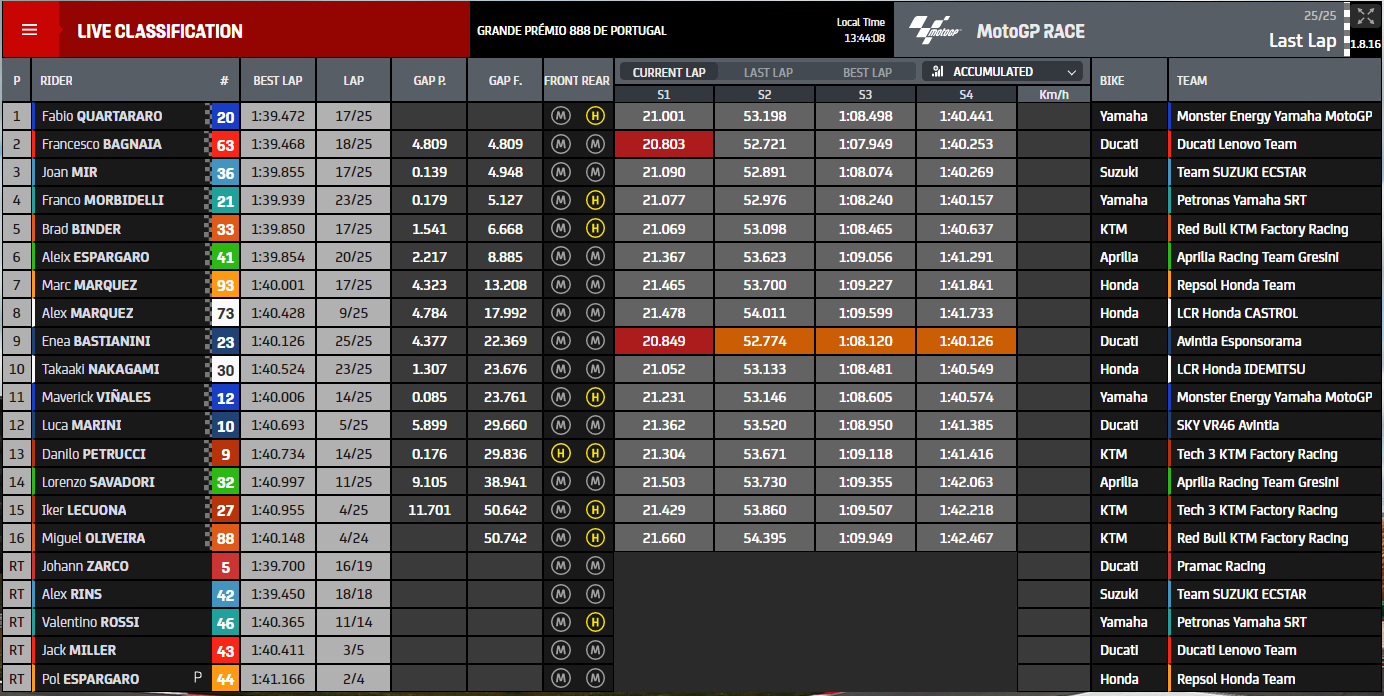