Headline, Insights, Most Important, MotoGP
2 months ago by Paolo Schmutz
0

Pramac Racing ready for the 2021 MotoGP season as protagonists. Here is revealed the livery of the Ducatis that will drive Johann Zarco and Jorge Martín.

Twenty years as protagonists in MotoGP. Pramac Racing thus begins a 2021 with a totally renewed line-up, with the new livery of its Desmosedici which is really similar to last year’s. Johann Zarco and Jorge Martín are energized, there is a great desire to do well in a team that Gigi Dall’Igna defines as “Fundamental for the development of Ducati Corse.” A further opportunity for ‘rebirth’ for the French driver after a few complex years, a great opportunity for the Spanish rookie, excited and ready to kick off this new adventure in the premier class.

“Starting as a game, we came to have a really strong team” declared Paolo Campinoti. “It will be a special year with four riders with whom we can rejoice. For us, the best result of 2020 is having brought both Pecco and Jack to the official team. Of course we are very happy with the new arrivals: Jorge Martín is a very strong rookie, in Johann we have a fast and experienced driver. It will be an exceptional season.”

After a first year in the red, Johann Zarco aims for important steps forward, this time as a Pramac Racing driver. “For me, this is the second season with Ducati, thanks to them I have returned to a good level and for 2021 it would be nice to aim for the podium and victory. After all the new winners from last year, I can be too. If we look at what has happened in recent years, for me it is an opportunity to be reborn, I’m back and I have to aim for something good to confirm it.”

“I know the bike, it’s an advantage over 2020, I can use everything I’ve learned. Last year I had great support from Ducati, this year I’ll have even more.” There is also a reminder of the possibility of getting into Pramac years ago. “Another era. Now I see my career in a different way, I am alone in managing things and there I am. I don’t know if I can compare it to a woman who has been looking for me for two years … But I can say that, even if I don’t know everyone yet, I already feel at home.”

Jorge Martín, former Moto3 champion and rookie of high hopes, arrives next to him. “Now everything is beautiful, it’s a new adventure and I can’t wait to start. I won a title, but I also made mistakes in the lower classes. In any case, I’m ready for MotoGP. Who is Jorge Martín? A quiet person, even if at times a little impatient! It’s something I have to work on.” The goal is rookie of the year? “Yes, but I don’t think about it too much. I aim to get good results especially at the end of the year. Ducati is a different brand, it’s passion, which you need to feel. I hope to do well.” 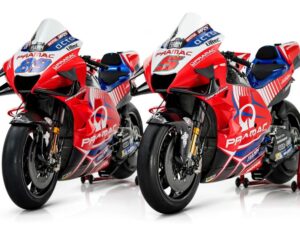 MotoGP, top speed is not enough: Fabio Quartararo at -10 km/h from Ducati