Two rounds of FP and two different names leading the rankings: Andrea Dovizioso managed to win the top position during FP1, but he couldn’t improve his time for FP2, that went to Alex Rins instead. The latter registered this Friday’s reference time just before the chequered flag, and with the same bike burnt in a small accident on Thursday. Johann Zarco got a 1000€ fine because he decided to make some laps on a scooter at Sepang circuit. This kind of transportation is forbidden as in the past there were some accidents before the beginning of other GP’s free practices.

Track conditions had time to improve compared to the previous sessions when riders rode on a wet surface. MotoGP riders could start FP1 on an almost completely dry track, except for some damp areas. A noticeable fact was Jorge Lorenzo’s return after the Medical Center run some checkups and then gave him permission to race. But also saw the HRC tester Stefan Bradl on track today, an interesting re-entry in the LCR Honda team, substituting for the injured Cal Crutchlow. The round ended with Andrea Dovizioso taking the lead thanks to a great 1:59.697, ahead of Valentino Rossi’s and Maverick Viñales’ Yamahas. The current World Champion Marc Marquez took up the last position in the top 10. 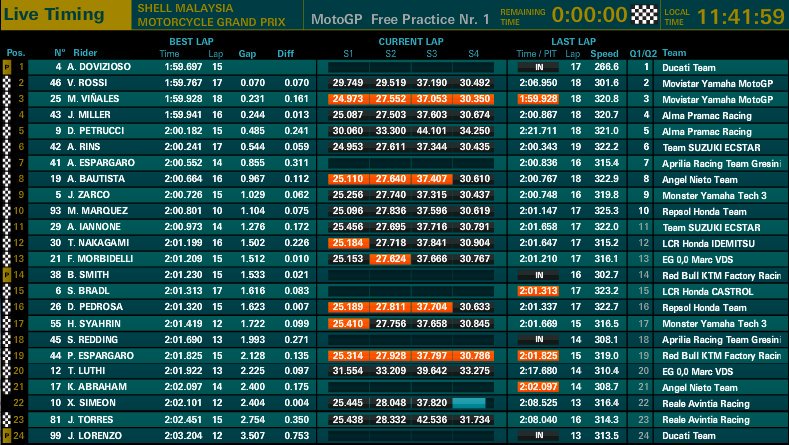 The second round of FP, this time on a completely dry track, gave us Honda, Ducati, Suzuki and Yamaha fighting for the top positions in the ranking with very short time differences among riders. Jorge Lorenzo didn’t give up and, despite being much slower than the leading group, he kept working hard on his Desmosedici in order to shorten his distance. He was also trying to regain the right pace after skipping the last GPs due to an injury. The last minutes of FP2 were as good as a Qualifying round, as all riders engaged in a fierce battle time against time in order to win the best positions. Eventually, Alex Rins took the lead and registered the best absolute time of 1:59.608, ahead of Marc Marquez (who risked falling down no less than 4 times), Jack Miller and Maverick Viñales. The only crash was that of Scott Redding.

MotoGP, Jack Miller: “The stitches were removed in the arm in the crash”

MotoGP, Jack Miller-Joan Mir collision: “He hit me from the first lap”