Thus ended the second official tests of 2021. The final MotoGP classification tells us that Fabio Quartararo is in the lead, with a time 560 thousandths from the absolute record of the Losail track. In second place is Jack Miller’s Ducati, third place for Aleix Espargaró ahead of vice-champion Franco Morbidelli and tester/substitute Stefan Bradl. The best rookie is Enea Bastianini, in order ahead of Lorenzo Savadori, Luca Marini and Jorge Martín. There were several incidents. Let’s see how it went.

Lots of activities for all teams, busy with rookies, changes of jerseys and news on motorcycles. In addition to the fact that all the riders were back from months of inactivity on a MotoGP bike. Whoever continues to surprise, however, is Aprilia: in addition to work on the swingarm, engine, electronics, front and rear holeshot device, Aleix Espargaró in particular (also author of a race simulation) is still in the high areas. Is it the right time for the Noale house? The Venetian structure hopes for it …

In recent days, the famous holeshot device has been seen on all motorcycles. Suzuki has only the front version, Yamaha the rear, all the other houses have the double version, including KTM. In Honda, we saw Stefan Bradl with a new chassis, while the new factory rider Pol Espargaró continues to grind kilometres. There was no lack of accidents for the LCR drivers Alex Marquez (two only today) and Takaaki Nakagami, fortunately without consequences. Jorge Martín also scored another fall, the second for him after the shakedown. We remember the biggest news at Ducati, tested by Michele Pirro and today also by Jack Miller: the holeshot “dragster”.

At Yamaha, tests of aerodynamics, swingarm, frame, especially for the official duo now composed of Fabio Quartararo and Maverick Viñales. For Valentino Rossi, in addition to his debut with Petronas colours, also some ergonomics tests, plus a few small updates for Franco Morbidelli. There was also an accident for Cal Crutchlow, with no consequences for the driver. Swingarm and frame tests at Suzuki, but also a few looks at the news for the 2022 season, already tested by test driver Sylvain Guintoli. In KTM, the bulk of the work is clearly on Dani Pedrosa’s shoulders, from the chassis to the exhaust. To report two falls instead for Brad Binder. 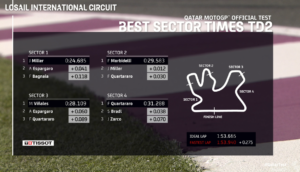