Andrea Dovizioso takes the lead during the first day of the Thailand GP close followed by Viñales, Crutchlow and Marquez. Lorenzo suffered a violent crash and had to be taken to the Medical Center for checkups: he has been declared fit to race.

With an excellent 1:31.090 registered on the final laps, Andrea Dovizioso managed to make the best absolute time of the day and to gain the head of the ranking, closely followed by Maverick Viñales, Cal Crutchlow and Marc Marquez. The latter finished FP2 with a margin of less than a tenth behind the Ducati’s rider. Jorge Lorenzo suffered a violent high side that gave us the chills: he was still recovering from an injury on his foot and had to be taken to the Medical Center for checkups.

The first thing to be noticed in today’s FP round is the new aerodynamic profile of Rossi’s M1, an innovative decision for the Doctor, that clearly hopes to end this weekend with a positive result. In the morning we only had soft and medium tyres, but as temperatures kept on rising many riders opted for hard tyres. Soon enough, Petrucci’s Desmosedici started to have some technical issues and the Italian rider (who initially got the 2nd place) had to leave it on the track side and walk back to the pit lane. In the meanwhile, on Turn 4 both Redding and Iannone crashed in two different accidents, luckily with no serious consequences.

Marquez needed only a few laps to register the best time of the weekend, this way taking the lead again. Pedrosa temporarily climbed up to the 2nd place ahead of Dovizioso, Bautista and Lorenzo. But the Majorcan rider, still recovering from an injury to his foot, suffered a violent high side on Turn 3 that completely destroyed his bike and left him painfully on the ground. He had to be taken to the Medical Center on a gurney for further checkups, but he has then been declared fit to race. After Simeon suffered another fall in the same area, the Race Direction decided to show the red flag, suspending the round to check the track conditions (some liquids and debris were found on Turn 3).

Once the round re-started, the ranking underwent considerable changes, especially toward the end. Andrea Dovizioso eventually managed to register the best absolute time of the day, closing the FP2 1st ahead of Maverick Viñales and Cal Crutchlow. Marc Marquez got the 4th place, followed by Danilo Petrucci (who could re-start the round with the second bike after the technical issues on the first one) and Andrea Iannone, with Alvaro Bautista (who slipped at the end of the round) 7th ahead of Dani Pedrosa, Valentino Rossi and Johann Zarco. 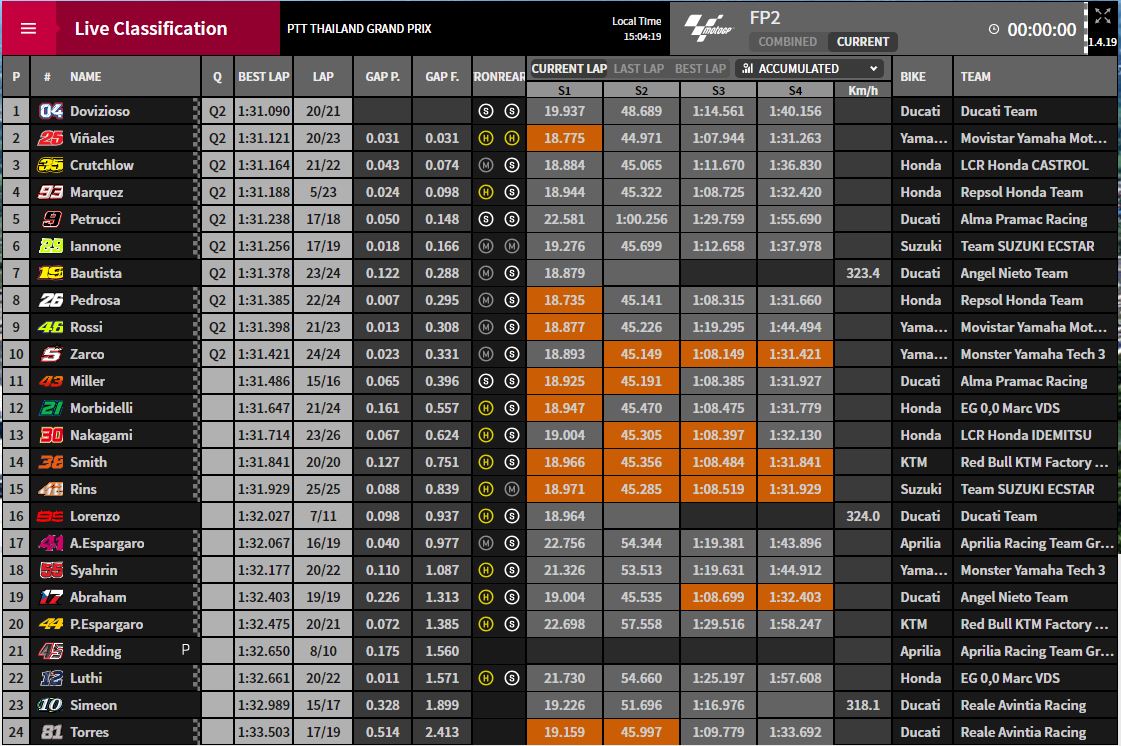 MotoGP: Maverick Viñales on top on the second day of testing at Sepang