Andrea Dovizioso ends this 2018 with an outstanding performance despite the heavy rain. 2nd Rins, and first podium for KTM and Pol Espargaró.

Andrea Dovizioso closes the 2018 season with a last exceptional success at the Circuit of Valencia: the Ducati rider wins despite the heavy rain that strongly influenced the whole race (it was eve suspended at some point, and restarted much later). Alex Rins got an excellent 2nd place, but Pol Espargaró also stepped on the podium winning the first KTM podium’s position with a nice 3rd place in a crazy race. The wildcard Michele Pirro got the 4th place and Dani Pedrosa closed his career with a well-deserved 5th position. Johann Zarco is the best rider of an independent team, while Franco Morbidelli gained the Rookie of the Year title.

It seemed that the track could have been dried up during the race, but the rain decided to start falling again crushing all hopes. We saw Rins’s amazing kickoff, who managed to take the lead ahead of Viñales, Dovizioso, Pol Espargaró and Marquez, all already fighting hard for the top positions. Aleix Espargaró’s race lasted for just a few laps, who seemed to be much in pain when he left. The Pramac team riders weren’t luckier, and also the wildcard Pirro, “Polyccio” (both managed to re-enter the race), Marquez, the rookie Lüthi, Iannone, Smith, and Viñales all fell down. Morbidelli’s crash made him risk the title of Rookie of the Year, but 14 laps before the end the red flag was flown in order to suspend the race. At that point, Rins, Dovizioso, Rossi and Pedrosa were leading.

Later on, the race could finally restart to complete the remaining 14 laps of the last race of the season. Rins performed a great start again, but Dovizioso did it even better and remained stuck right behind him in order to overtake him as soon as possible. Rossi took up the 3rd place ahead of Pol Espargaró and Pedrosa, with Pirro ready to board. The situation was still difficult, due to a large amount of water already on track and the intermitting showers. Just 4 laps before the end, Rossi’s chances to step on the podium died with a slip that left him 13th. A triumphant “Dovi” crossed the finish line in the best possible position despite the hardship, ahead of a great Alex Rins and Pol Espargaró. The latter won an extraordinary first podium’s position for KTM in MotoGP. Celebrations also for Michele Pirro, who got an amazing 4th place, and for Dani Pedrosa, who ended his last World Championship race with a more-than-deserved 5th place and as the only Repsol Honda rider crossing the finish line. 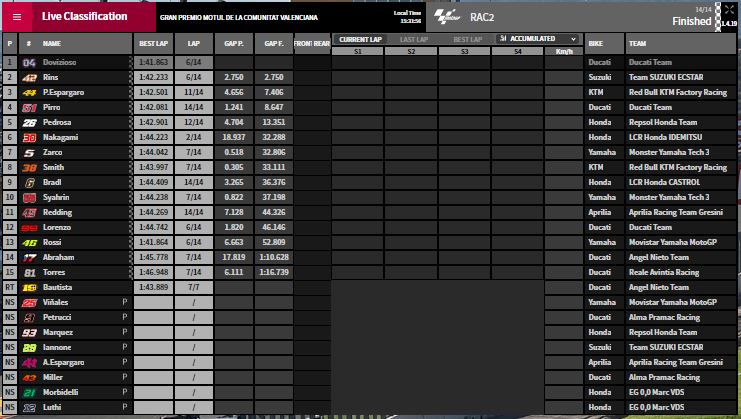