Maverick Viñales conquers his first 2018 pole position at the very last race. Alex Rins and Andrea Dovizioso also on the front row, Marquez fell, put his dislocated shoulder back into place, and kept on riding.

Maverick Viñales is back to the pole position after a very long fast that started at Aragón in 2017: the Spanish rider of the Movistar Yamaha team won the first position on the starting grid at the very last race of the 2018 season (therefore also his only pole for this season). Next to him tomorrow there will be Alex Rins, for the first time on the front row, and Andrea Dovizioso, followed by another Ducati rider, Danilo Petrucci (the best rider of an independent team in this Qualifying). We got all the ingredients for an exciting last race, starting on Sunday at 2 PM.

The Pramac team riders only got one bike for today’s Q2: Miller fell during FP4, while Petrucci’s D16 had some technical issues  (with a little bit of fire too) toward the end of FP. Marquez fell at the beginning of the round, suffering a dislocation of the left shoulder (the one he injured in Japan): he went straight to the motorhome to have it fixed and re-entered Qualifying. An intense fight fired up during Q2, but both Miller and Zarco crashed almost immediately. Maverick Viñales eventually got the pole position ahead of Alex Rins and ad Andrea Dovizioso; with Danilo Petrucci opening the second row ahead of Marc Marquez and Pol Espargaró. Andrea Iannone got the 7th place, followed by Aleix Espargaró and Dani Pedrosa. Jack Miller, Johann Zarco and Michele Pirro filled up the remaining positions in the top 12.

On track for Q1, there were Bradl, Lüthi, Abraham, Bautista, Morbidelli, Viñales, Iannone, Nakagami, Smith, Redding, Rossi, Syahrin, Torres, and Lorenzo. The first round of Qualifying definitely had some unexpected names in it. Track conditions improved considerably compared to this morning, and all riders started with slick tyres. Only Smith, Bradl, Morbidelli and Lüthi decided to use front medium tyres. After a fierce battle, Andrea Iannone and Maverick Viñales won access to Q2, while Jorge Lorenzo didn’t make it for just 42 thousandths, closing Q1 3rd and therefore getting the 13th place on tomorrow’s starting grid. Just behind him, there will be the rookies Takaaki Nakagami and Franco Morbidelli, while Valentino Rossi will kick off from the 16th position. 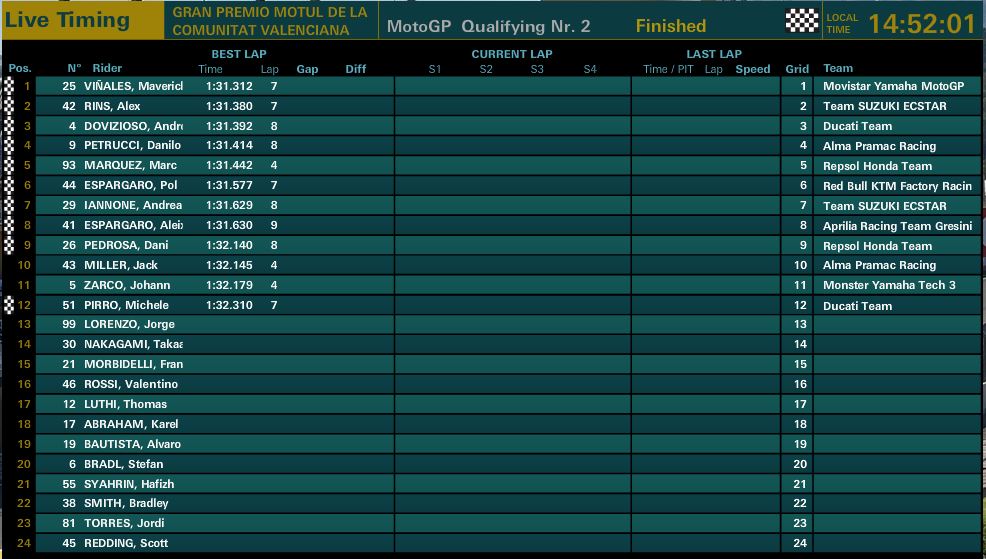