This early morning Yamaha has presented the new bikes for this 2021 MotoGP season. We saw Fabio Quartararo in his new colours, with his teammate Maverick Vinales and their bikes. Many people, such as Lin Jarvis, spoke and then the YZR-M1s, which the official team will use this season, were presented with a video.

This morning Monster Energy Yamaha presented its new bike, the YZR-M1, which will be used during the 2021 MotoGP season by the official team. In the beginning, there was Lin Jarvis, managing director of the team, who spoke about the drivers and how they will try to work together after some of them changed team. “We didn’t go through anything like this before. We will start much earlier with more knowledge and we are confident that we can better manage every situation. It will be strange, but better for him, to not have Valentino around here – said Jarvis – We know we have the speed but we have to find solutions to be consistent throughout the season. Both Maverick and Fabio will have chances to win the title but I don’t feel like Fabio will have more pressure, he is a good driver and I’m confident about him. We will look at every detail and we will improve very much“.

Then the interview went on and Meregalli, team director, spoke about last year’s bike and this year’s one. “Last year it was a strange season. We had some technical problems but we are confident that in Japan they will be able to find the way to fix them.” He continued: “I believe in Maverick more than you can think. We are focusing on 2021 season and also Fabio will be a good candidate for the championship. I’m confident about this package and the key world for this year will be consistency“.

Then the interview went on with the two drivers interviewed by the Italian Journalist Federica Masolin. First to speak was Maverick Vinales. He said that “Being the oldest rider in the team is strange but it motivates me more. I will take Valentino’s place and I’ll lead the team to the win“. He had also some words for one of his opponents, Jack Miller: “He is for sure a title contender. He has done a great work last year and now he knows strong and weak points of his Ducati. Anyway I think that all 4 Yamahas will be on top and I’ll bring the team in the first positions.”

Before showing the new bikes Fabio Quartararo was interviewed too and showed us his new box. He also spoke about the emotions he felt while changing team: “Being in the Factory team is different. You have to work on the development and not just state if things are good for you. I have created a family with my engineers during this two years and I’m 100% ready for the new season. I’m happy also to work with new faces.” Then he went on: “Last year I led the championship for the first time, but this year the goal is to win it. I’ll have to forget past. I won’t try to win just because I’m French. I’ll try to win as a driver, not just as a Frenchman.”

At this point the bikes were shown with a pre-recorded video. We could see the two YZR-M1s with their new livery. It’s black in the middle and fades to blue on the top and at the bottom. 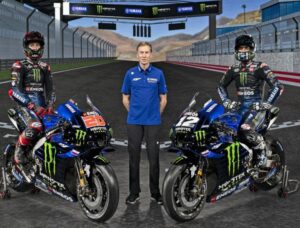