A muddy wet AMA Supercross round took place in San Diego and the one defeating such conditions in the best way was Eli Tomac. The Kawasaki frontrunner scored his first win in 2019 season and so he’s become the new championship leader, as Cooper Webb crossed the line just in eighth position. Tomac was joined on the podium by Marvin Musquin and Ken Roczen, while fourth position went to surprising Justin Bogle.

ROCZEN FALLS – The start had seen Ken Roczen grabbing the holeshot, but the German fell one moment later and so he dropped back till fourth place, while Tomac went first ahead of Justin Bogle, Justin Barcia, Ken Roczen and Blake Baggett. As the laps went by, the conditions became tougher and tougher for the riders, as the mud made it increasingly difficult to choose the best line to follow.

BARCIA RETIRES – While Eli Tomac escaped the pack, Justin Barcia had to retire due to a technical problem and so third place moved from the Yamaha rider to HRC spearhead Ken Roczen. Behind him, Bogle (2nd) and Tomac, Red Bull KTM pair Marvin Musquin and Cooper Webb started a nice fight for fourth position, that saw the Frenchman providing a great reaction against Webb’s assault.

THE FALL OF THE CHAMPIONSHIP LEADER – Later on, an unexpected turn of events took place, as championship leader Cooper Webb fell to avoid a clash with Musquin. The American managed to rejoin the race, but he finally couldn’t do better than eighth place. Many valuable points were lost by the man from Newport…

TOMAC WINS AFTER TAKING A HUGE RISK – The final stages were definitely rich in suspense: a final mistake caused Justin Bogle to be overtaken by both Ken Roczen and Marvin Musquin and then Roczen got much closer to Eli Tomac, since a problem forced the Kawasaki rider to stop for some seconds. At the very last lap, Tomac crossed the finish line in first position, although he nearly fell while lapping another rider. Behind him, Ken Roczen made a mistake due to some smoke in front of him and so he was passed by Musquin. Justin Bogle finished in fourth place, while evergreen Chad Reed finished the event in fifth position. 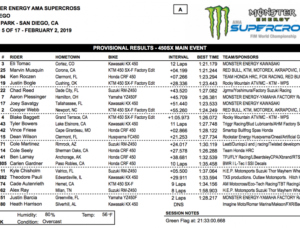 CHAMPIONSHIP STANDINGS AFTER 2019 AMA SUPERCROSS ROUND 5 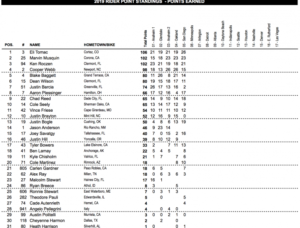 The next round of 2019 AMA Supercross FIM World Championship will take place next Saturday at Minneapolis. Don’t miss it!

Supercross: Best and worst riders of the first five rounds of 2019

Supercross: All set in San Diego for Ken Roczen vs. Cooper Webb duel

Supercross: May Cooper Webb finally fight for the title?

Supercross: All set in Oakland for the fourth round of 2019 season