ASB 1000 championship leader, Broc Parkes, can be sure that home heroes, Azlan Shah and Zaqhwan Zaidi, will be turning up the heat at Sepang in order to disrupt the Australian’s march to the title.

It is ARRC’s second visit to Malaysia’s premier circuit in 2019, after a sensational season opener there in early March, which saw Azlan win race one and Zaqhwan take a brilliantly judged win in a wet race two. Broc scored a third and a fifth.

Since then, the experience, strength and consistency of the endurance racing exponent has seen him notch up six more podiums, including three wins, to put himself on 188 points, 35 clear of Zaqhwan and 45 ahead of Azlan. Honda Asia Dream Racing with Showa has narrowed the power deficit of the sweet-handling SP2 to make it capable, in Zaqhwan’s hands, of winning in dry conditions on fast circuits. Meanwhile, Azlan’s success on the ONEXOX TGGR SAG BMW has earned the team a measure of factory support to boost his chances of narrowing the gap at the top.

There are four other riders realistically capable of scoring podium finishes, including Broc’s Yamaha Racing ASEAN team-mate, Yuki Ito, currently fourth in the championship and only 12 points adrift of Azlan. Then there is double trouble lurking in the Yamaha Thailand garage, as Apiwat Wongthananon and Ratthapong Wilairot look to build on their improving form in the litre class. 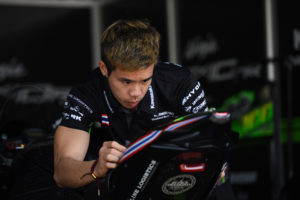 Kawasaki Thailand’s Thitipong Warkorn is also a potential winner. The former Moto2 rider left round one as championship leader, after a brace of second places, only to suffer a near career-ending back injury one week later while competing as a wildcard in the World Superbike round at Chang International. He returned to racing in August, since when he has clinched Chang International’s own superbike championship against quality opponents that included former ARRC 600 champion, Chalermpol Polamai. He also made it to Zhuhai for ARRC Round 5, where he took third and fifth places. While still not 100 percent fit, Thitipong’s native speed and mental strength should carry him to the podium. 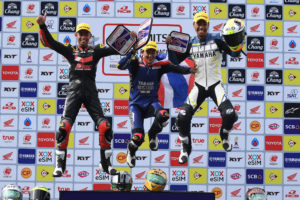 Yamaha Thailand’s Peerapong Boonlert begins 2019’s penultimate round this weekend with an 80 point lead over Kasma Daniel Kasmayudin. With a maximum possible score of 100 points from the final four races, the 21-year-old Thai only needs to score another 20  to wrap up the championship. In other words, a rider who has collected seven wins and three thirds from 10 starts needs no more than two fifth place finishes. And that assumes that Kasma pulls off the double.

Daunting mathematics won’t stop the ebullient Kasma from continuing to ruffle Peerapong’s feathers in front of his home crowd and from seeking to record a second 600cc win following his inaugural class victory last time out, at Zhuhai. ONEXOX TKKR SAG’s Ramdan Rosli, who has had a large portion of misfortune during 2019, is another local hero capable of claiming a win.

SIC Junior ZK Racing’s Adam Norrodin, who lies third in the standings, will miss round 6 after being called up to replace the injured Moto 2 rider, Khairul Idham Pawi. Adam is the fourth stand-in for Khairul and is in good company, as the three previous replacements on the Petronas Sprinta Kalex have been GP stars, Mattia Pasini, Jonas Folger and Bradley Smith.

With all the aforementioned riders being on Yamahas, it is worth looking at some of the Honda-mounted talent. Astra’s Andi Farid Izdihar heads the list and is fourth in the standings with 84 points, in no small part due to second place finishes at Sepang and Tailem Bend in rounds one and two. Musashi Boon Siew’s young Malaysian pairing, Azroy Hakeem Anuar and Helmi Azman are just behind.

2018 Underbone 150 champion Helmi, who had the wind taken out of his sails by a nasty knock in round two, commented from Sepang, “I feel good for this weekend. I’ve been training my body hard and also working on my riding. This is a home race for and I will show what I can do and go all out to get the podium.” 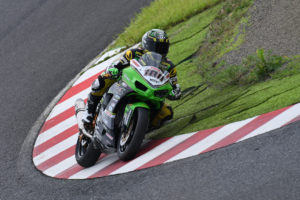 Andy Muhammad Fadly’s 2019 championship charge faltered in round five at Zhuhai, as Astra Honda recovered from a slow (by their standards) start to 2019 and, led by the quick, consistent, Irfan Ardiansyah, closed the gap at the top to just five points. Fadly is on 145.

Carrying a 500rpm ‘equaliser’ which is imposed every time a rider in the top five of the standings gets a 25-point advantage, Fadly’s Manual Tech KYT Kawasaki team is faced with the decision whether to go all out and risk another 500rpm cut or to play a tactical game, which would risk losing the lead. Astra’s Lucky Hendriansya, who lies fifth and is the only top five rider without an equaliser, is 48 points behind Fadly. For what it’s worth, this observer expects to see the competitive instincts of Fadly and team manager, Katsuake Fujiwara, triumph over tactical considerations.

Astra’s Awhin Sanjaya is 16 points behind Irfan on 124 and in third position, while AP Honda’s Muklada Sarapuech is on 107, despite four DNFs from 10 starts. Muklada’s team-mates, Piyawat Patoomyos and Tatchakorn Buasri are also in strong form and could upset the established order at Sepang. 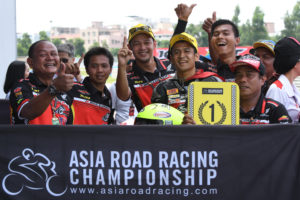 The second half of the season in AP250’s has been lit up by Rafid Topan Sucipto. Since changing to Honda with the privateer Bike Corner SYS KYT Racing Team, Rafid took pole position first time out in round four at Suzuka and followed it up with another pole and a sensational double win in round five. As well as reminding the world of his talent, the Indonesian has given himself a theoretical tilt at the title that is, for now, unhampered by any threat of ‘equalisation’.

Aracer which supplies the control ECU that enables the equaliser sytem, is fielding their own wildcard entry this weekend, in the form of Taiwanese rider, Chi Ying Chiang. Idemitsu Boon Siew Honda will be running two wildcards, Idlan Haqimi Raduan and Syarifuddin Azman. 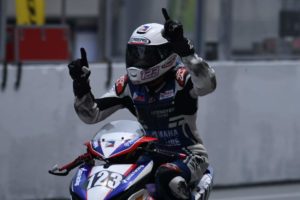 Kyle Paz and Akid have plenty to play for. The UMA Racing Yamaha Philippines rider scored a win and a third at Sepang at the very beginning of the season and picked up his second win in race one at Zhuhai last month. Akid, who rides for Malaysia-based UMA Racing Yamaha, also took his second victory of 2019 at Zhuhai and has no intention of allowing either Kyle Paz, or Fernando Masato, who won race two in round one, to show him around his home circuit again. 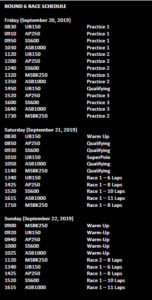 Underbone racing being what it is, it’s easy to forget that it was SND Factory Racing Rapido’s Wawan Wello who led the standings before the last round. The young Indonesian had a miserable weekend, with two DNFs that resulted in him being pushed down to fifth.

However, just mentioning the championship leaders does no justice to an Underbone 150 preview. With a mix of underachieving former champions, like Gupita Kresna, Wahyu Aji Trilaksana, Affendi Rosli, the wily Ahmad Fazli Sham, sensational 13-year-old Aldi Satya Mahendra, who won a wet race in Suzuka and scored another podium at Zhuhai and another 15 riders capable of mounting the podium, the action at Sepang will be as difficult to predict as ever. Australian teenager, Travis Hall, makes welcome return to Hi Rev SCK Honda after missing round five.