The final day of ARRC Round 3 at Suzuka Circuit delivered another series of hard fought battles, with plenty of variations from the first races on Saturday. Weather conditions were on the warm side of perfect, with continuing blue skies and air and track temperatures touching 30 and 49 degrees respectively.

With the technical gremlins that delayed the start of Saturday’s race duly dispatched, Underbone 150cc Race 2 got away without a hitch. Team All for One’s Md Affendi Rosli​ made the best of it and gapped the rest of the field through the esses and all the way to the high point of the circuit, at Spoon Curve. From there the chasing pack, led by Race 1 winner Md Helmi Azman and Yamaha Yamalube SND’s Gupita Kresna, drafted their way up to the orange Yamaha over the fast final sector. Pole man Fakhrusy did not launch well and, cearly out of sorts, drifted to rear of the 20 bike field. 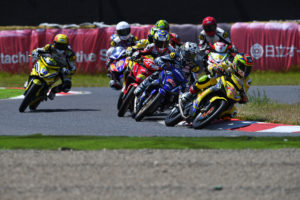 The six lap race delivered the very best of Underbone 150cc racing and showed why the sport has many thousands of fans far beyond Asia, as the first 12 riders ebbed, flowed, wriggled and barged their way up and down the group. On aggregate it was Affendi, Gupita, Helmi, Syahrul Amin, Ahmad Fazli Sham and, from half distance, Wahyu Aji Trilaksana who spent most time at or near the front of the group.

Affendi took a half second lead into the last lap, knowing it would not be enough to escape the chasing peloton, so slowed down on the approach to the hairpin to drop a few places and try to position himself for most advantage at the final chicane. Wahyu and Helmi took over briefly, but as the field spread wide and squashed their Dunlop slicks into Suzuka’s asphalt for the last time, Gupita got the best position, remained composed and squirted out of Turn 17 to take the win​. As he punched the air​, Wahyu and Izzat snatched the remaining spots on the podium and Helmi Azman ​got the better of Syahrul to take fourth. Akid Aziz was sixth from Peerapong Luiboonpeng, while Affendi, after starting the last lap in the lead ​finished 8th, just a few hundredths in front of Fazli and Syafieq Aiman. 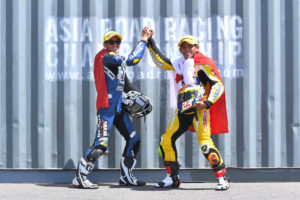 Gupita, who won back-to-back titles in 2014 and 2015 before taking a two year excursion into AP250s, was ecstatic. After a disappointing return to the series during the first two rounds of 2018, his third place in Race 1 and Sunday’s victory have given him a confidence boost and an emphatic reminder ​to his rivals and sponsors of what he can do on a light motorcycle. Wahyu, who also started the season poorly by his own standards, looked almost as happy as his fellow Indonesian, having sewn up his second podium of the weekend.

At the halfway point in the season, Helmi Azman, with ​a total of ​94, tops the standings by a single point from Izzat Zaidi​. Wahyu Aji Trilaksana moves up to third with 72, from Akid Aziz’s 71. Full results here. 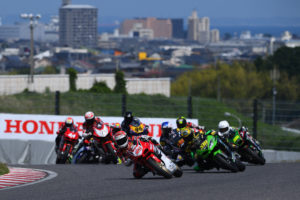 Rheza Danica Ahrens completing his second career double win was the only predictable outcome from another fraught intermediate class battle on Sunday afternoon.

Manual Tech KYT Kawasaki’s Andy Md Fadly did his best to spoil Rheza’s perfect weekend by beating the Astra Honda rider into Turn 1. ​Order was restored one turn later as Rheza dismissed the Kawasaki man, putting plenty of fresh ​air between ​himself and the rest by the time they got to Degner curve at the end of Sector 1. The two best Yamahas of the weekend, under Reynaldo Christiano Ratukore and Anuparb Sarmoon, also got away well from the second and third rows to ​latch onto the back of Fadly and ahead of the rest of the 15-strong chasing group.

Muklada recovered from a poor start to muscle her way from 7th to 3rd, sparring with Fadly, whose exuberance a day earlier had pushed her out of podium contention. As he had done in Race 1, Anuparb kept himself in with a chance by staying within the top four of the group fighting for second place. Kritchaporn Kaewsonthi, Muklada’s team mate, again impressed, taking turns at the front​ with Mario, Awhin and Fadly.

Things went badly wrong for the two AP Honda riders early on Lap 5, when Kritchaporn clipped Muklada’s rear wheel as they braked for the first first corner, send​ing​ them both over the high side and, together with the two CBR 250RRs they had just vacated, tumbling end over end through the gravel trap.

That broke up the big group, leaving the battle for second and third between the Astra Hondas of Mario and Awhin, Fadly on the Kawasaki and the Yamahas of Anuparb and Reynaldo. However, the chasing group led by Peerapong Boonlert, Ahmad Afif Amran,​Akito Narita and M Faerozi, worked together to catch up on the overpass​, making a ​party​of ten to dispute the final few turns. Almost nine seconds after Rheza had clocked out for the day, Mario and Fadly converted their hard work into second and third places, while 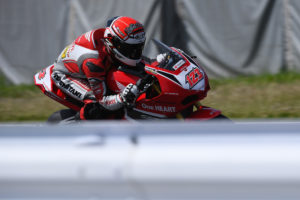 Afif and Narita edged out Anuparb, who got over the line two tenths clear of his Yamaha Thailand team mate, Peerapong. Awhin and Reynaldo were similarly shoved back to 8th and 9th, while Faerozi was 10th, 0.7 ahead of Takehiro Yamamoto.

By adding 50 points over the weekend, Rheza has neatly matched his points tally to his race number of 123, which is 21 more than his 15-year-old wingman, ‘Super’ Mario. Anuparb is 10 points further behind on 92, which is 30 more than the unfortunate Muklada has been able to accumulate. Full results here.

A win for West as Kubo comes of age

As is often the case, there were clues in the Supersport 600 warm-up about how the final results would turn out. Lap times aside, Webike IKAZUCHI’s Anthony West could be seen harassing first Ratthapong Wilairot, then Yuki Ito, making close moves on them under braking. Keminth Kubo was quick and aggressive, while Manual Tech KYT Kawasaki’s first and second place finishers from Race 1, Azlan Shah Kamaruzaman and Ahmad Yudhistira, looked fast and relaxed.

Azlan Shah catapulted away from the start ahead of Ratthapong, Ito and Keminth, only to be shown the red flag at the start of Lap 2 following a crash by Patrick Li. The remaining 22 bikes returned to pit lane while the wrecked Webike IKAZUCHI R6 was recovered and returned to the team. 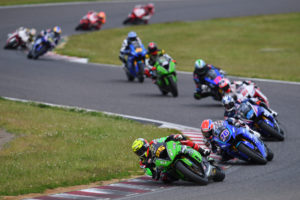 Azlan proved that his previous getaway had been no fluke, by repeating it when the race got underway again, for a reduced distance of 10 laps. He built a gap back to Ratthapong, Ito, and the others as he flowed through the left and right turns of the first sector. His advantage disappeared predictably enough on the 900 metre overpass section as the Yamaha Thailand man pulled the pack ​up to the rear of the Kawasaki. Ito squirmed past Ratthapong through the last chicane and onto Azlan’s tail they began lap 2, as Zaqwan, West, Keminth and Yudhistira bunched up behind, a few bike lengths ahead of Tomoyoshi Koyama. Ito ended the second lap as he had some two minutes earlier, this time by squeezing past Azlan and into the lead.

As Ito held the lead on Lap 3, West and then Yudhistira went past Ratthapong and closed down Azlan, while Keminth kept station just behind them. One lap later, West went past Azlan at the hairpin, leaving the previous day’s winner to deal with the attentions of his Manual Tech team mate. West took the lead from Ito at Degner from Ito on Lap 5, only for the Japanese to snatch it back at the end of the lap, while Yudhistira passed Azlan for third at the hairpin. K​eminth relegated Azlan to fifth, but there was nothing between these five as they swapped positions and rehearsed their lines for the last lap. Keminth took a turn at the front from Ito, the Thai teenager riding with maturity beyond his years and with the self belief of a race winner. Behind the leading five, Andi Farid Izdihar, showing no ill effects from his highside of the day before, took sixth place from Ratthapong. A gritty Decha Kraisart who was managing to dismiss the pain and muscle weakness from his healing right wrist injury, was looking surprisingly solid in 8th place. 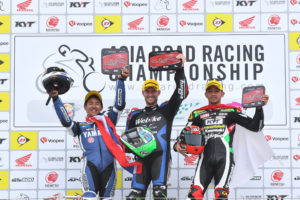 Last time around, Keminth led the leading group of five into the final chicane, but got out-braked by West, who planted himself in front and held the lead to cross the line three tenths of a second ahead of ​the 19-year-old, ​who won a photo finish for second from Yudhistira, Ito and Azlan, in that order.

West was delighted, having finished on the podium four times from four starts in the 2018 championship to give himself 86 points and a lead in the standings ​of​ 14 points from Azlan and by 17 from Ito in third. Keminth’s 20 point boost moves him into fourth with 57 points, five more than Yudhistira. Full results here.