“Pecco” Bagnaia dictates in Qualifying, gaining the leading position on the starting grid. Next to him in the front row there will be Xavi Vierge and another Italian rider, Lorenzo Baldassarri.

Francesco Bagnagia leaves his mark on Moto2 Qualifying in Le Mans: after falling during FP1 the World Champion constantly improved until he managed to obtain his first pole position in Moto2, together with a new record time on the French track. Xavi Vierge gets the 2nd place, ahead of Jerez’s winner Lorenzo Baldassarri. The race will start at 12.20 PM on Sunday.

It only took a few minutes for the World Championship leader to take the lead of the Qualifying ranking, and he also managed to set a new record time (3 tenths faster than Lüthi’s 2017 pole time). Vierge and Baldassarri closed right after him. This round also featured a lot of falling, starting from Pasini and continuing with Schrotter, Navarro, Lowes (twice), the Forward Racing duo (twice for Manzi), wildcard Tangre, and rookie Tuuli.

Marquez was the only rider who tried to take the pole from Bagnaia at the end, but he made some mistakes during the last two sectors and couldn’t seal a good lap. “Pecco” eventually earned the best position in the starting grid, followed by Xavi Vierge and Lorenzo Baldassarri. Joan Mir will be opening the second row, ahead of Marcel Schrotter and Alex Marquez; Sam Lowes finished 7th followed by Brad Binder, Simone Corsi, and Miguel Oliveira. 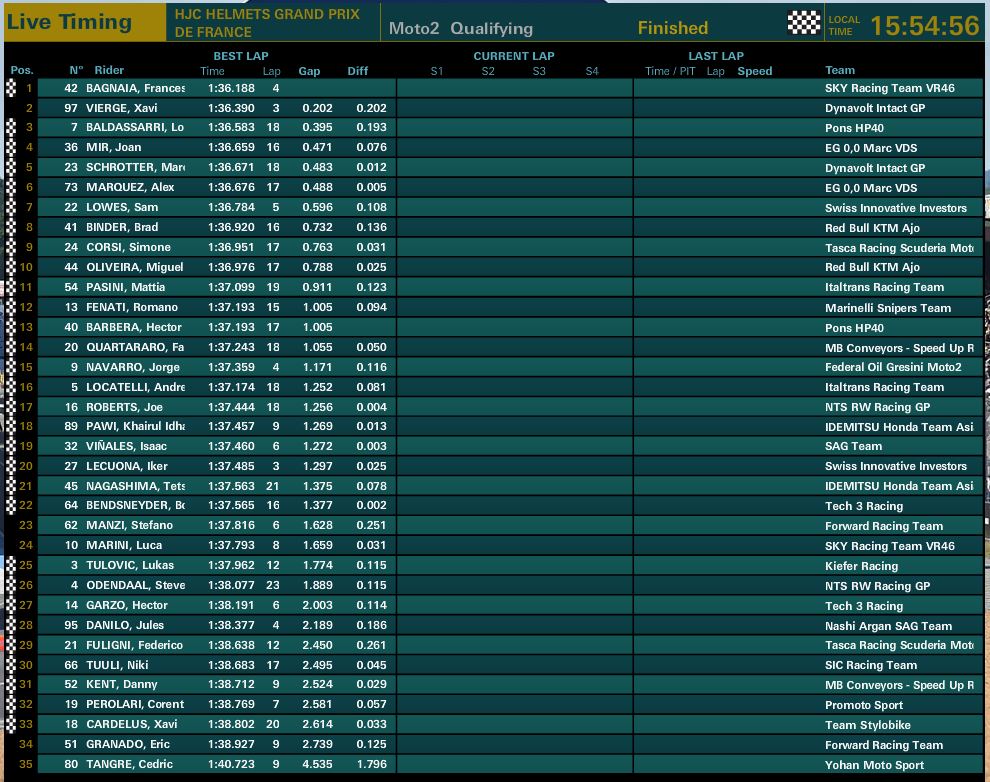