Bagnaia made it a perfect race and with this new success, he reinforced his World Champion leadership. Marquez finished 2nd and Mir got his first podium in Moto2.

The first news is that Xavi Vierge had to do the warm-up lap starting from the pit lane, therefore beginning his race from the last position on the starting grid: this was terrible news for the Spanish rider as he had already gained the front row but then experienced some issues with the fuel pump and couldn’t line up on time. From the head of the grid, Bagnaia gave us a great start, closely followed by Marquez and Schrotter. The Red Bull KTM Ajo team riders managed to climb up some positions, while Baldassarri lost many before ending his race earlier due to a fall. Garzó got a penalty for a jump start and was given a ride-through.

The race turned out to be a two-riders battle between Bagnaia and Marquez, but with a large margin between them that allowed the World Championship leader to gain another well-deserved victory, reinforcing his leadership. Mir and Schrotter engaged in a fierce fight for the last step on the podium, eventually won by the Spanish rookie who got his best result in Moto2 so far. Marcel Schrotter finished just one position out of the podium, but he can be proud of himself for the amazing results of the weekend, despite his injured shoulder. Xavi Vierge performed an incredible come back: he started last on the grid but managed to cross the finish line 5th.

Miguel Oliveira got the 6th place, ahead of Romano Fenati and the local rider Fabio Quartararo. Brad Binder arrived 9th followed by Stefano Manzi, who entered the top 10 for the first time this season. There have been some accidents in this race too, among which Fuligni, Pasini (who managed to re-enter the race) and Baldassarri. Marini had to give up soon because of a training injury. 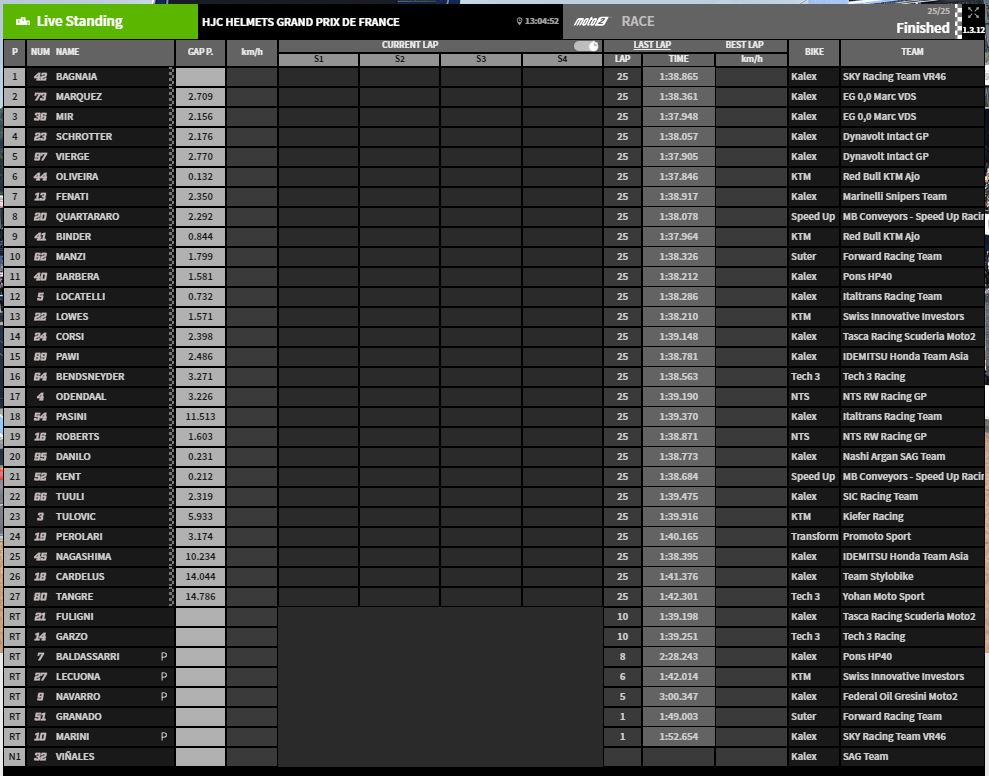