Mattia Pasini conquers the leading position on the starting grid, and he’s ready for the GP of Italy. Behind him are Schrotter and Marquez, while the current World Championship leader ends up 4th.

Tomorrow, Mattia Pasini (ph: Marco Lanfranchi) will kick off first from the Mugello Circuit: the Italian rider, belonging to the Italtrans team, conquered his pole position number 6 in the Moto2 Championship, the 17th in his career. This is a very important result for the rider as he will be racing at home. On the front row, there will be Marcel Schrotter and Alex Marquez too, while the World Championship leader Francesco Bagnaia got the 4th place. The race will start on Sunday, June 3rd, at 12.20 PM.

The young riders belonging to the Moto2 middle category gave us a great show, starting Qualifying with a fierce battle for the best positions on the starting grid. Unfortunately, we also witnessed a few falls: Lorenzo Baldassarri (his team managed to fix the bike in no time) and, a few minutes later, also Stefano Manzi. Times got stable with Schrotter leading the round, followed by Marquez and five Italian riders, until Pasini changed everything making the best partial time. All riders tried to overtake him with a final assault, but the ranking remained basically unchanged until the chequered flag.

Mattia Pasini conquered the pole position in Mugello, his sixth in the Moto2 Championship, and he will be sharing the front row with Marcel Schrotter and Alex Marquez. Francesco Bagnaia will kick off from the 4th place, followed by his fellow countrymen Simone Corsi (250 GP), Romano Fenati, Luca Marini and Lorenzo Baldassarri. The last two positions in the top ten went to Joan Mir and Jorge Navarro. Here you are the other Italian riders’ positions: Adrea Locatelli 17th, Stefano Manzi 20th, Federico Fuligni 31st. 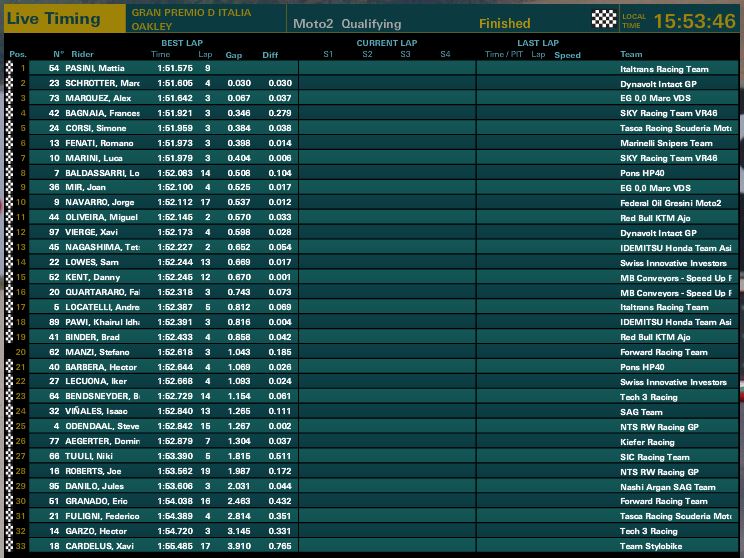