Xavi Vierge opens an extremely short-timed ranking: behind him are Marquez and Schrötter, but 28 other riders crossed the finish line in the space of 1 second!

The Moto2 FP2 ended with a fierce fight despite the previous red flag. Xavi Vierge registered the best time of the day but Alex Marquez and his teammate Marcel Schrötter arrived just 2 thousandths behind him. The rest of ranking also finished the round with a very short gap, so that most of this Moto2 FP ranking is enclosed in 1 second. Action starts again tomorrow with FP3 and Qualifying.

The ranking changed multiple times since the first minute, the opposite to what happened in the morning during FP1. The first fall was that of Lecuona on at the Sachsenkurve, with no injuries for the rider. Half-way through the round the current World Champion Bagnaia slipped and went out of trajectory on Turn 3, ending his race on the gravel as he couldn’t stop his KALEX. Soon after, Fuligni fell too, after hitting Manzi on Turn 2.

Schrötter’s performance stood out, as he was clearly trying to do his best for the team on the home track. He managed to take the lead of the round in its second half but Pawi got on his way and conquered the 2nd place ahead of Lowes and Pasini. Ten minutes before the end a red flag was flown, temporarily suspending the round: the protective barrier had to be fixed after Fuligni’s crash.

Once the FP2 started again, Manzi slipped on Turn 1 and left the way for the final assault. Eventually, Xavi Vierge (taking advantage of Alex Marquez’s wake) got the 1st position, closely followed by the Spanish rider and his teammate Marcel Schrötter. Khairul Idham Pawi got the 4th place, ahead of Francesco Bagnaia, Lorenzo Baldassarri, and Mattia Pasini, while Sam Lowes, Simone Corsi, and Joan Mir took up the last positions in the top ten. 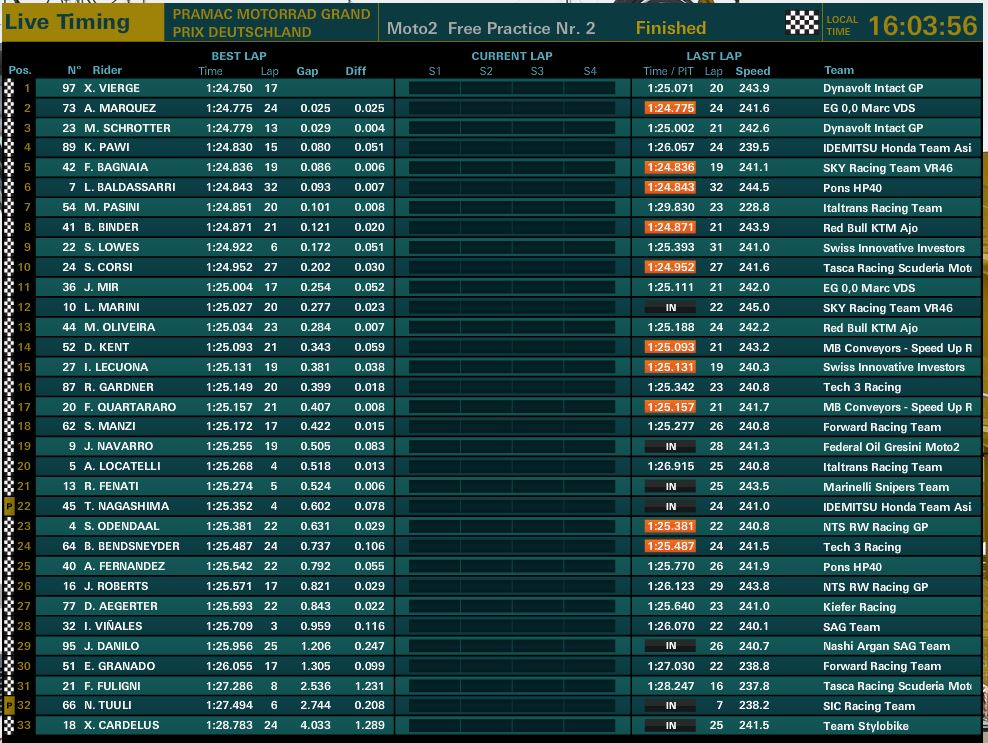