Alex Marquez managed to be on top on both FP rounds today, registering the best absolute time during FP2 ahead of Quartararo, Marini and Bagnaia.

The first two rounds of Moto2 FP got the same name in the top position, that of Alex Marquez. The Estrella Galicia 0,0 Marc VDS rider managed to leave his mark on both FP1 and FP2, registering the best absolute time in the last few minutes of FP2 ahead of Fabio Quartararo and the Sky Racing Team VR46 duo, with Luca Marini closing ahead of Francesco Bagnaia.

Some very heavy rain fell during the night and there still were some wet areas on track in the first part of FP1. As time went by, the situation improved but times remained 2 seconds longer than those of 2017. The reference time today was 2:08.351, registered by Alex Marquez during FP1, but who managed to get the overall 1st position too, just before the end of the second round, ahead of Mattia Pasini, the current World Championship leader Francesco Bagnaia and Luca Marini. Augusto Fernández and the new winner of the CEV Moto2, Jesko Raffin, took up the last two positions in the top 10, just ahead of Miguel Oliveira. We also saw two new names today, substituting for other injured riders: Dimas Ekky Pratama, riding instead of Bo Bendsneyder, got the 29th place; and Rafid Topan Sucipto, racing for Stefano Manzi, who got the 32nd place. 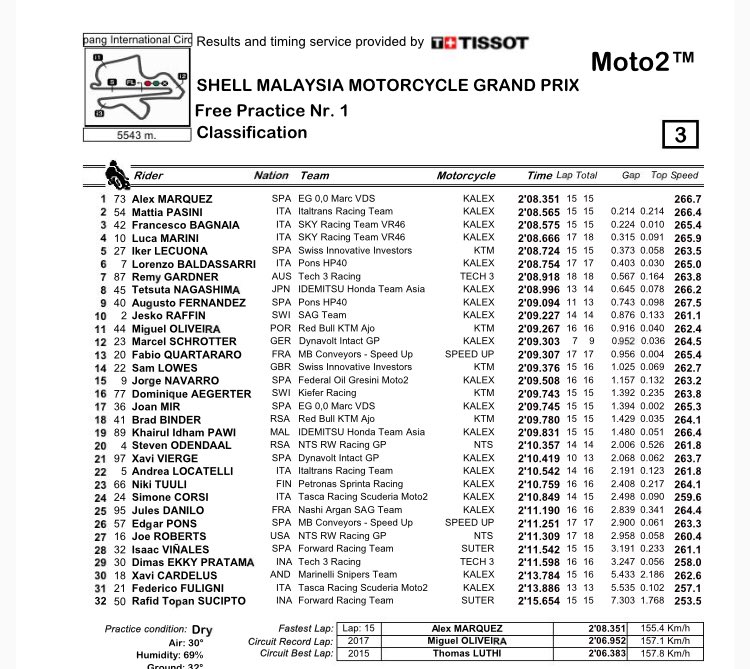 Some light rain fell before the beginning of FP2 and clearly slowed down the starting procedures so the round began a few minutes late. Very few riders could register a relevant time, among them Quartararo and Navarro, who initially took the lead. But as minutes went by and the track dried up, we saw more and more action. The Italian riders showed off in the second half of FP2, particularly Mattia Pasini (best absolute time with a nice 2:07.107) and Francesco Bagnaia who managed to climb up the temporary ranking. A few minutes before the end of the round, we also witnessed the crash of the rookie Joan Mir. However, there were some last minutes changes that favours Alex Marquez, who eventually managed to register an excellent 2:06.928 that gave him the 1st place. Just behind him came Fabio Quartararo, Luca Marini, Francesco Bagnaia and Mattia Pasini, with Miguel Oliveira 7th. 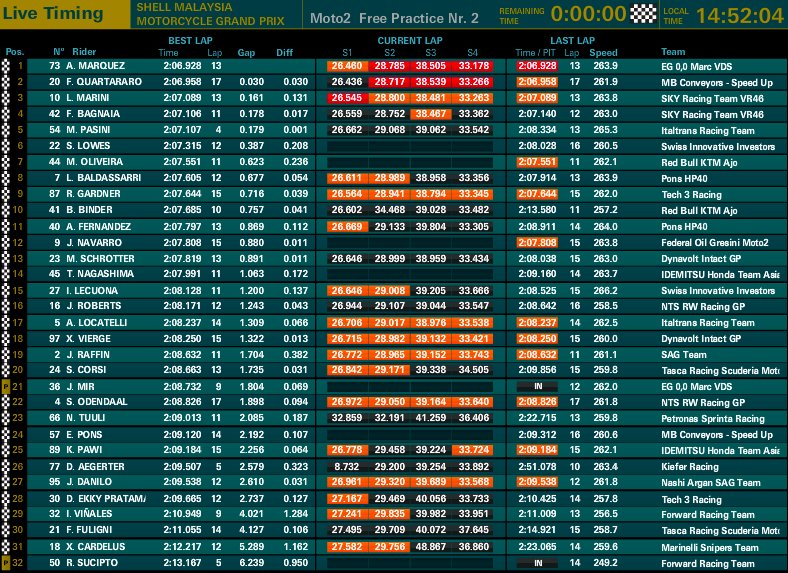