Alex Marquez registers a record pole position (with a final crash) at Sepang: he will kick off 1st ahead of Luca Marini and Fabio Quartararo.

Alex Marquez needed just a few minutes to register a new record that gave him the pole position at Sepang International Circuit. He also fell in the last few seconds, but nobody else could take the Spanish rider away from his leading position. He will start the race from the best position on the starting grid, ahead of Luca Marini (only 4 tenths behind) and Fabio Quartararo. His main rivals for the World Champion title, Francesco Bagnaia and Miguel Oliveira, only got the second and third row respectively.

The battle for the pole position immediately fired up, but it lasted just until Alex Marquez’s record with an incredible 2:05.829. This is also the new Qualifying record, as the last was the 2:06.383 made by Thomas Lüthi back in 2015. Quartararo and Garnder got the 2nd and 3rd place in the ranking, while Oliveira is 6th and Bagnania is temporarily out of the top 10. Rafid Topan Sucipto crashed during the round.

Another two riders, Sam Lowes and Alex Marquez, slipped during the round but no one could threaten the pole position already won by the Estrella Galicia 0,0 Marc VDS rider. The front row will be completed by Luca Marini and Fabio Quartararo, with Remy Gardner 4th followed by Mattia Pasini and the current World Champion Francesco Bagnaia. Miguel Oliveira closed the round 7th ahead of Xavi Vierge, while Brad Binder and Marcel Schrötter filled up the last two positions in the top 10. 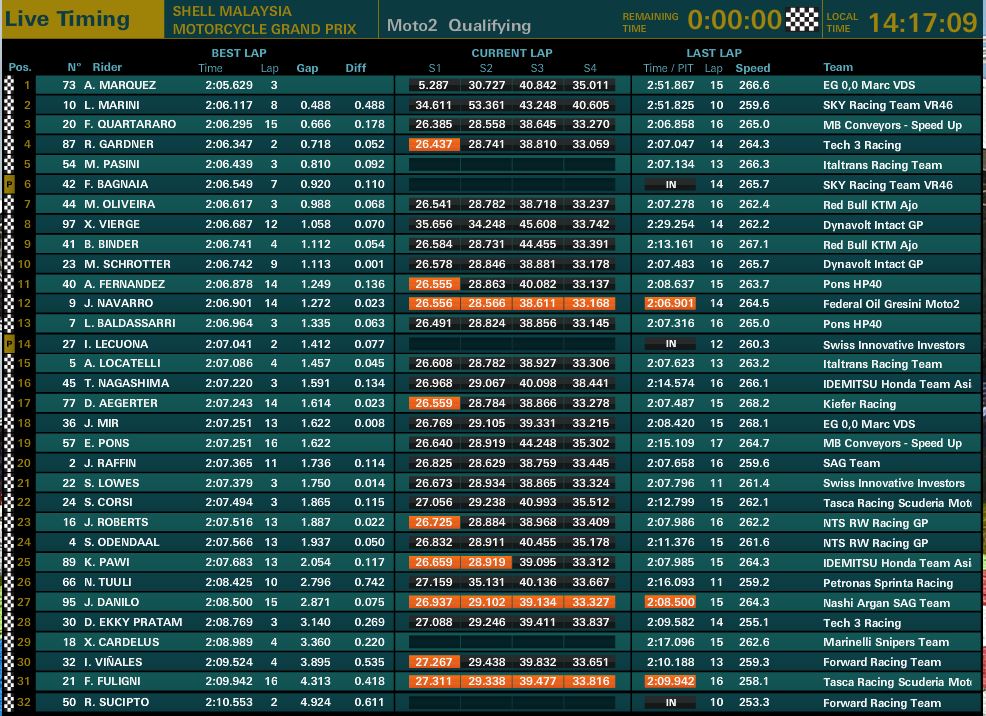