Lorenzo Baldassarri conquers the pole position on the Buriram track, a place at its debut in the Moto2 World Championship. The other two positions on the front row go to Alex Marquez and Luca Marini.

The Moto2 Qualifying round for the first race on the Thai track called upon an Italian rider to fill up the top position on the starting grid: Lorenzo Baldassarri managed to register the best time and kept it up until the chequered flag. The rider of the Pons HP 40 team will be opening a front row with very short advantage on the rivals, as Alex Marquez only missed the pole position for 26 thousandths and Luca Marini for 34. Mattia Pasini arrived 4th (after he also crashed) ahead of Miguel Oliveira and Francesco Bagnaia. We will definitely see an interesting race tomorrow, Sunday, October 7th, starting at 6.20 UK time.

As soon as the ranking began to stabilize, we found two Italian riders temporarily fighting for the leading position: Lorenzo Baldassarri, now in pole position, and Mattia Pasini, 2nd ahead of Miguel Oliveira. The Italtrans rider suffered a setback at the end of the round, as he slipped on Turn 9 while making a pole-worth lap time. In the meanwhile, Marini, Marquez and Binder started an intense battle for the best position on the starting grid.

When the chequered flag was already flying and all the riders had completed the final lap, Lorenzo Baldassarri was still heading the overall ranking. He gained the pole position at the Buriram track, closely followed by Alex Marquez and Luca Marini. Mattia Pasini will be opening the second row, ahead of the two riders currently racing for the title of World Champion; e.g. Miguel Oliveira and Francesco Bagnaia. Brad Binder closed Qualifying session in 7th, followed by Fabio Quartararo, while Augusto Fernández and Marcel Schrötter took up the remaining position in the top 10. 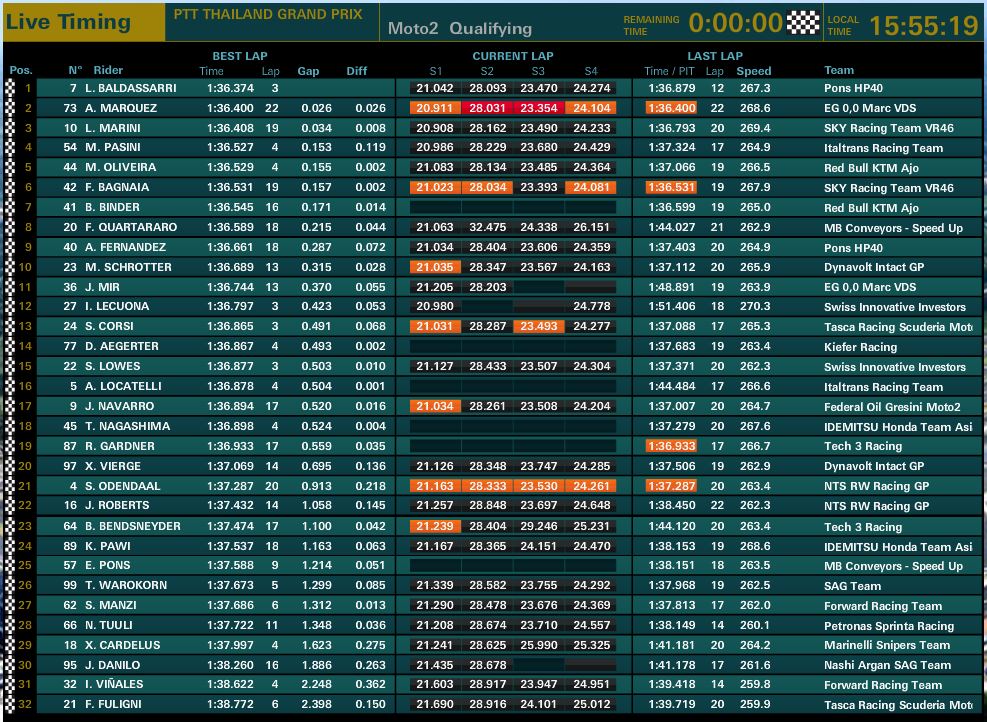