Miguel Oliveira‘s experience in Moto2 ends with another splendid victory: the current runner-up in the intermediate category wins at the Circuito Ricardo Tormo, basically with no rivals until the nose-up that crosses the finish line. The Valencian rider Iker Lecuona got the 2nd place, closing the season the best way after constantly improving his performance. Alex Marquez is 3rd, stepping on the podium despite a crash while still on top of the race.

This was a wet race, but also a problematic one since the starting grid: Quartararo’s bike had some technical issues and he was forced to start from the pit lane. Vierge kicked off amazingly, followed by Oliveira, Pasini, Marquez, Binder (who left the race a few laps after due to a crash) and Schrötter. The race ended right after its beginning for the poleman Marini, who fell at the second turn. On the same turn, Mir suffered a crash too, hitting Bagnaia (who lost many positions) and crushing Baldassarri, while the upcoming riders had to take a longer way to avoid the mess.

Too many riders fell due to track’s conditions: the last 2018 race was Marcon’s debut in a World Championship but he had to leave the race earlier too. It didn’t go any better to Vierge, who initially got the 3rd place but then slipped halfway through the race. 10 laps before the end, here you are the unexpected turn of events: Marquez, who had been leading the race for most of the laps, fell and left the 1st place to Oliveira, but he managed to jump back on his bike and re-entered the race 3rd. Not so lucky Tuuli, who was 5th (this would have been his best result of the season) before he fell down and had to withdraw from the competition.

Standing in front of his ready-to-celebrate fans, Miguel Oliveira got a new victory during his last race in the Moto2 World Championship, leading with a large margin from the Valencian rider Iker Lecuona and from Alex Marquez. Mattia Pasini finished just one step away from the podium. Remy Gardner got the 5th place, ahead of Fabio Quartararo (performing an excellent comeback from the pit lane) and Marcel Schrötter. Augusto Fernández, Andrea Locatelli and Simone Corsi took up the last positions in the top 10, while the current World Champion Francesco Bagnaia ended 14th. Federico Fuligni managed to cross the finish line too, closing his experience in a World Championship with the 19th place. 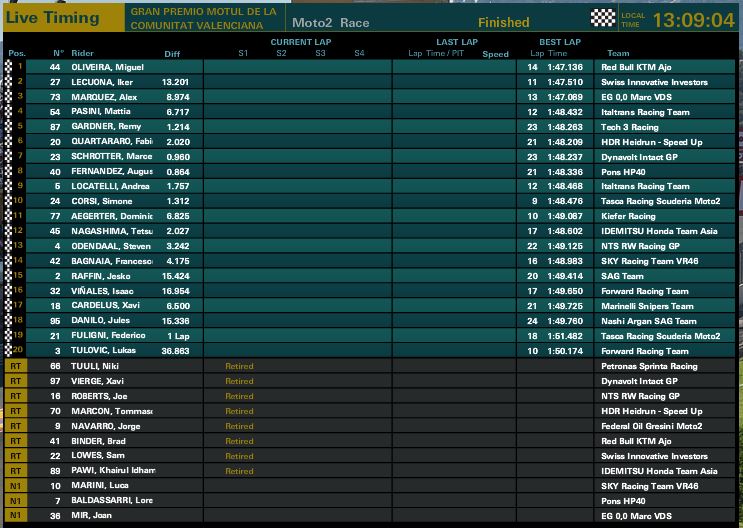