Iker Lecuona made the best time of the round (not the absolute one) even during today’s rainy FP2, closely followed by Niki Tuuli and Lorenzo Baldassarri.

Another wet round this Friday, and one filled with accidents too (almost half of the riders crashed at least once). Iker Lecuona closed the round 1st, but he didn’t miss the chance to fall either. The 2nd place went to an unexpected name, the Finnish rider Niki Tuuli, who finished ahead of the first among the Italian riders Lorenzo Baldassarri (3rd).

The round started under an heavy rain, but despite the Circuit’s conditions all riders immediately went down the track to make the most out of this second round of FP. It was a session filled with crashes: starting from Tulovic (substituting for the injured Manzi), but with many others following, including Garzó (racing instead of Bendsneyder) and Marcon, the latter at his first World Championship race. Even Lecuona slipped, but only after registering the best time this morning and taking the lead during the second half of FP2.

We didn’t see the best times ever today, but Iker Lecuona confirmed his top position, followed by Niki Tuuli (one of the few riders who managed to improve his morning’s time, together with Gardner, Raffin, Fuligni and Marcon) and Lorenzo Baldassarri. Joe Roberts got the 4th place ahead of Xavi Vierge and Miguel Oliveira. Simone Corsi finished 7th followed by Alex Marquez (both in for checkups after falling). Remy Gardner and Fabio Quartararo got the last two positions in the top 10. 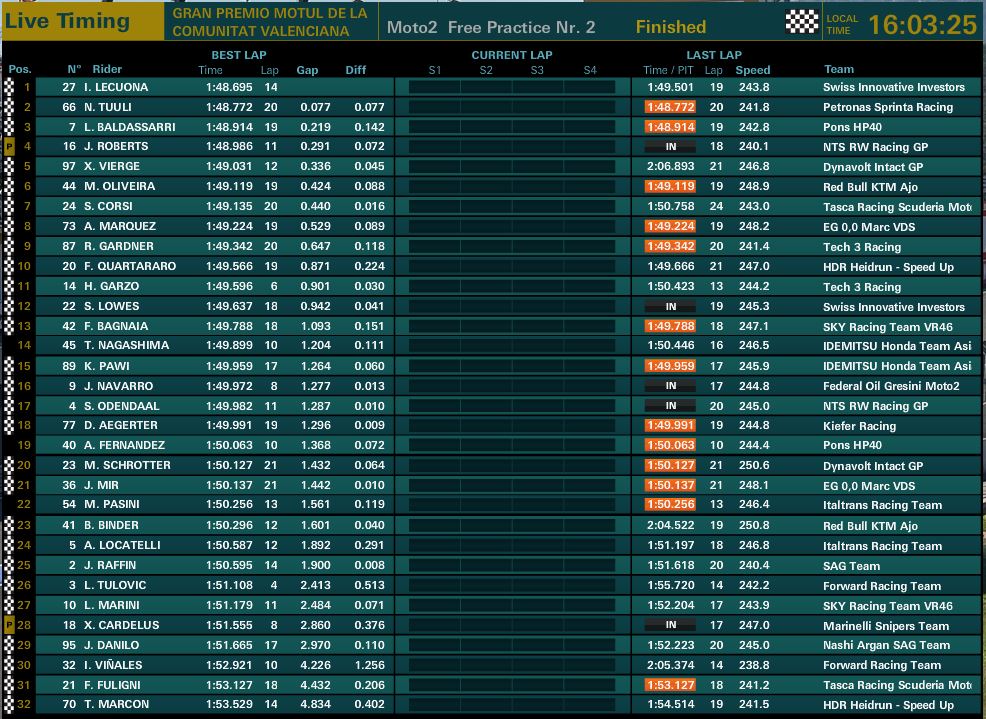