Luca Marini will kick off from the pole position at Valencia’s Circuit. On the front row with him there will be Xavi Vierge and Marcel Schrötter, the new World Champion Francesco Bagnaia is 4th.

Second pole of the year for Luca Marini after the one in Brno: the Italian rider leaves his mark on the last Qualifying of the year, after winning at Sepang. He got the first position on the starting grid at the GP of Valencia, and together with him on the front row there will be Xavi Vierge and Marcel Schrötter. The new World Champion Francesco Bagnaia will be opening the second row.

Compared to the previous rounds, track’s conditions were much better for the young Moto2 riders. All riders immediately took the track to make the most out of this Qualifying round. The first fall was that of Lecuona, but the whole round was a really lively one since its very beginning. The ranking got more stable only when Marini temporarily took the lead, followed by Schrötter, Vierge and Bagnaia. Garzó crashed too, while the Dynavolt Intact GP riders gave a hard time to the number 10.

Nobody could take the first place away from Luca Marini, who managed to win a new pole position ahead of Xavi Vierge and Marcel Schrötter. Francesco Bagnaia will be opening the second row, together with Lorenzo Baldassarri and Sam Lowes. Joan Mir is 7th ahead of Augusto Fernández and Fabio Quartararo, while Miguel Oliveira took up the last position in the top 10. 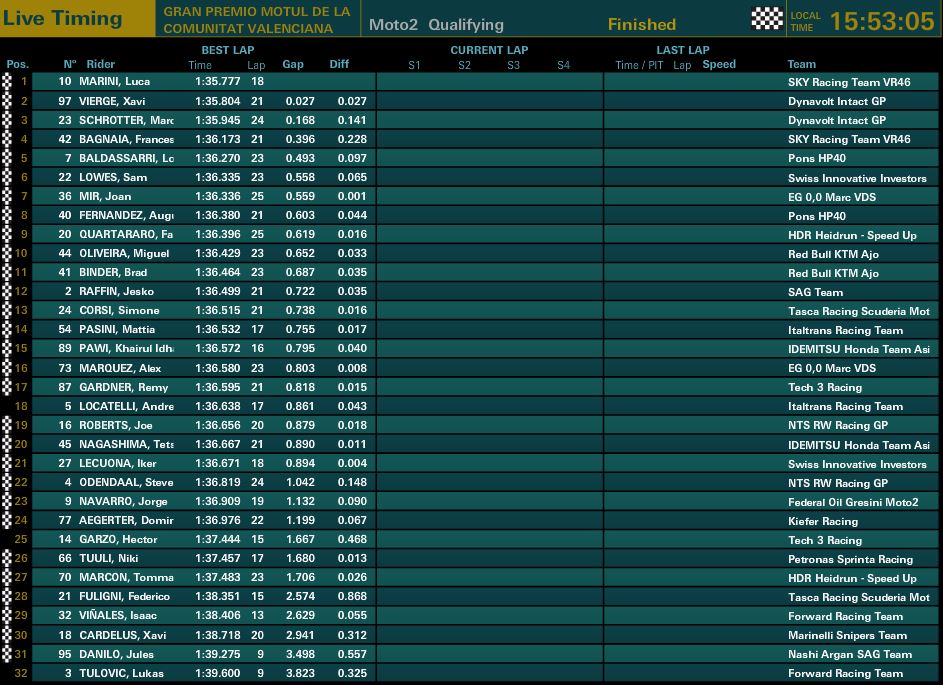 MotoGP, Luca Marini: “In Ducati we were shocked after my first laps”

MotoGP, Luca Marini: “I hope for a rivalry with Bastianini”