Lorenzo Dalla Porta celebrates the renewal of his contract with Leopard Racing with an amazing victory, his first in a World Championship. Martín and Di Giannantonio stepped on the podium too, while Bezzecchi crashed at the last lap.

An epic race at Misano World Circuit Marco Simoncelli: the Italian rider Lorenzo Dalla Porta eventually won the race, his first in a World Championship, managing to overtake both Jorge Martín and Fabio Di Giannantonio with very short leads, 58 thousandths and 64 thousandths respectively. All three riders got a step on the podium, but for the Spanish rider (this was the first time he got a 2nd place this season) is leaving San Marino as the new World Championship leader, as Marco Bezzecchi fell during the last lap (now he is 8 points behind the Del Conca rider).

A great start for the Italian riders Di Giannantonio and Bezzecchi who immediately took the lead, leaving Martín 6th. We witnessed two crashes right after the beginning of the race: one of wildcard Zannoni (who managed to re-enter the race) and then Lopez. But a little after there was a more serious accident on the final turn: it all started with a highside for Masiá, that hit Bulega, Canet, Sasaki, and Bastianini, who were just behind him. None of the riders got injured (even though both Sasaki and Canet were taken to the Medical Center for checkups) but what a pity! The crash created a hole between the first 5 riders and the rest of the group, who remained more than 2 seconds behind.

McPhee also fell, and he tried to re-enter the race, but the bike suffered too many damages and he was eventually forced to go back to his pit lane. The leading group of 5 riders kept on fighting hard for the podium, with the three Italian riders Dalla Porta, Di Giannantonio (who managed to stay in the game despite a little mistake) and Bezzecchi working hard to stand out despite Rodrigo and Martín continuous assaults.

The race of the now ex-World Champion ended early during the last lap as he suffered a violent crash. Lorenzo Dalla Porta managed to win his first race in a World Championship thanks to a wonderful final sprint that allowed him to cross the finish line first, just a few thousandths ahead of Jorge Martín and Fabio Di Giannantonio. Gabriel Rodrigo closed the race 4th, with a large advantage from Jakub Kornfeil, Albert Arenas, Dennis Foggia, and Darryn Binder. Andrea Migno and Niccolò Antonelli took up the last positions in the top 10, followed by Tony Arbolino. Stefano Nepa finished 16th, right outside the points-zone, while the wildcards Yari Montella and Kevin Zannoni ended up 19th and 20th. 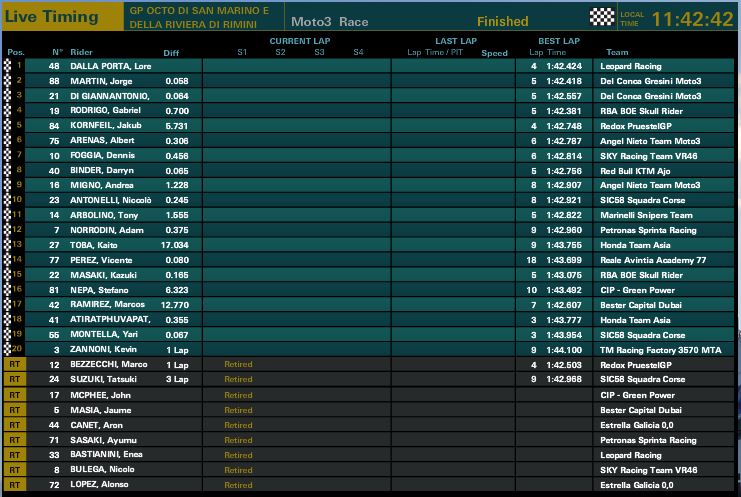