An all-Italian top 3 in this FP2 with Tony Arbolino leading the ranking followed by Marco Bezzecchi and Niccolò Antonelli.

The second round of FP ends with an all-Italian leadership: in the last few minutes, Tony Arbolino managed to set the best time of the day, just 8 thousandths ahead of the World Championship leader Marco Bezzecchi. Niccolò Antonelli finished 3rd, around two-tenths from the head of the ranking.

This afternoon’s cloudy sky didn’t stop the young Moto3 riders and they went down the track to register their best times. We saw a group of Italian and Spanish riders engaged in the final battle as they took up the first 11 positions in the temporary ranking: halfway through the round, Bezzecchi conquered the head of the group but his main rival in this Championship, Martín, was closely following him. Soon after, the rain flag was flown, and a few raindrops forced the riders back into their pit lanes for a few minutes, before starting again.

The wild card Tom Booth-Amos fell on Turn 8 (he slipped also during this morning session) and a little after the other wild card Jake Archer fell too. The most important changes in the ranking happened just a few minutes before the end of the round: Tony Arbolino crossed the finish line first, ahead of Marco Bezzecchi and Niccolò Antonelli. Gabriel Rodrigo arrived 4th, followed by Aron Canet and Philipp Öttl, while Fabio Di Giannantonio closed this FP2 7th ahead of Jakub Kornfeil, Tatsuki Suzuki, and Jorge Martín. 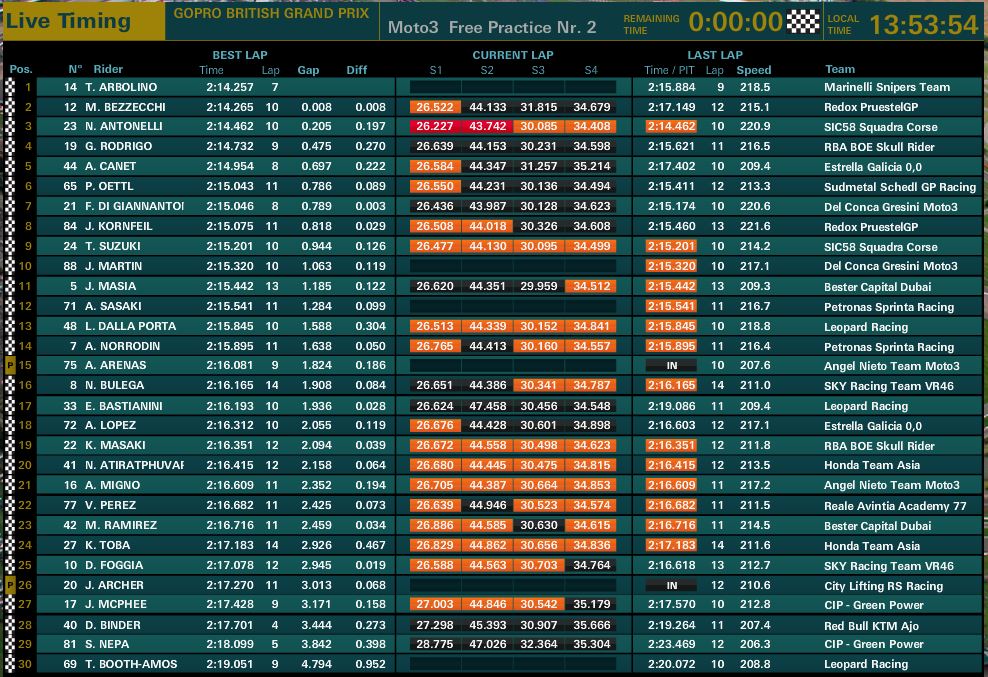