The Repsol Honda Team rider Dani Pedrosa is the fastest on Friday, closing FP2 1st ahead of Danilo Petrucci and Alvaro Bautista.

The first day at the Brno Automotodrom gets Dani Pedrosa’s signature, the only rider who managed to go under 1:56 in this FP2. This way, he managed to register not only the best time of the round but the best of the day. Just behind him in the session were Danilo Petrucci and Alvaro Bautista, ahead of rookie Hafizh Syahrin (the best Yamaha). The current World Champion got the last position in the top 10.

This round saw extremely quick Hondas right from the beginning, with Marquez and Pedrosa registering the best times ahead of their brand-mate Crutchlow, temporarily followed by Petrucci and Iannone. Ducati has been working really hard and we definitely saw the results: the Alma Pramac Racing rider had a brand-new aerodynamic shape and Lorenzo’s Desmosedici also showed some improvements, including some changes on the gas tank.

As usual, we witnessed a hard-fought final assault, but the Hondas had no rivals. This time, it was Deni Pedrosa who conquered the first position with the best absolute time of the day ahead of Danilo Petrucci and Alvaro Bautista. The rookie Hafizh Syahrin got an unexpected 4th place, followed by Andrea Dovizioso, Maverick Viñales’ and Valentino Rossi’s Yamaha. The last positions in the top ten went to Tito Rabat, Johann Zarco, and Marc Marquez. 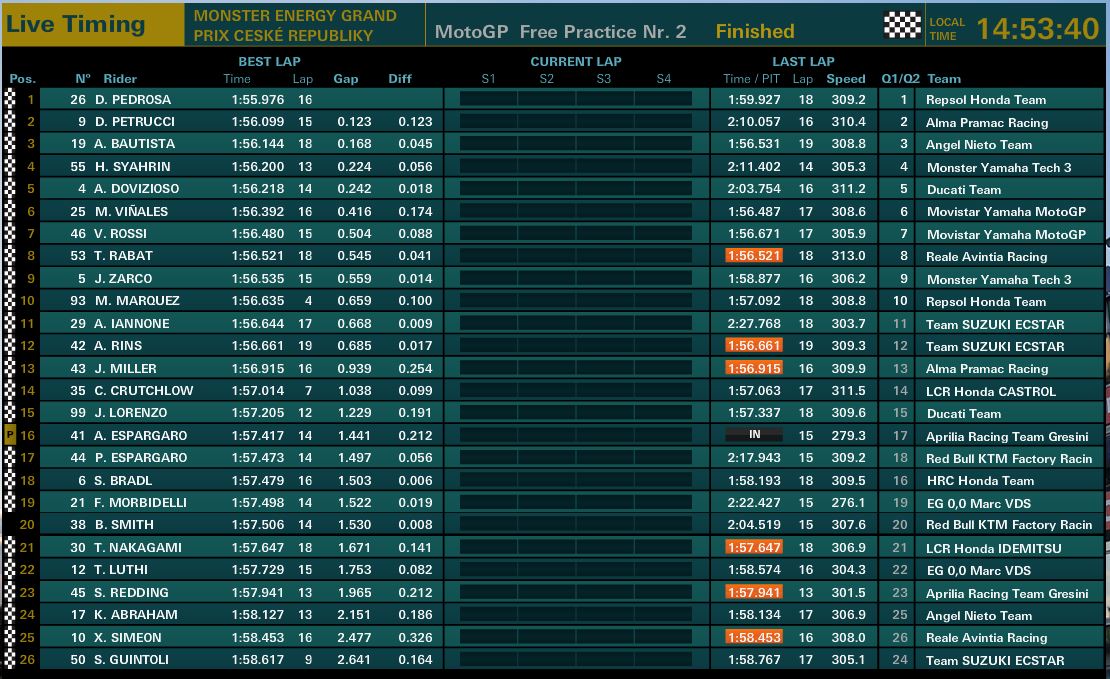