Despite a final crash, Marc Marquez got the pole also on wet track, followed by Yamaha riders Zarco and Rossi. Dovizioso fell too, and Torres had to withdraw due to a fractured hand.

Marc Marquez conquered the pole position today, the 80th in his career, during a round influenced by the heavy rain. After waiting for more than an hour, due to the incredible amount of rain that fell on Sepang Circuit, the battle for the best position on the starting grid could eventually start. The current World Champion managed to get the upper hand despite a final crash (he was then penalized for irresponsible riding and lost six positions on the grid). Yamaha riders Johann Zarco and Valentino Rossi got the other two positions on the front row of tomorrow’s starting grid. Jordi Torres got injured and fractured his hand after a violent fall during FP4 (he fell because of the rain that started falling on track while he was still using slick tires).

The fight for the pole during Q2 was not less fierce than others, but with much different times due to the wet track. Aleix Espargaró fell almost immediately (after he made it through Q1). Marc Marquez wasn’t luckier though, as he managed to register the best time but slipped in the last few minutes. This fall didn’t seem to influence his performance as he quickly went back to his pit lane and started racing again on his second bike. Andrea Dovizioso couldn’t complete his last lap due to a crash, so the current World Champion could confirm his pole position ahead of Johann Zarco (he decided to change his rear soft tyre just before the end and used a medium one that allowed him to climb many positions up) and Valentino Rossi. Andrea Iannone will be opening the second row, ahead of “Dovi” and the Pramac Racing riders Jack Miller and Danilo Petrucci. Alex Rins got the 8th place, followed by Alvaro Bautista and Dani Pedrosa, while the remaining positions in the ranking went to Maverick Viñales and Aleix Espargaró.

A violent rainstorm delayed the beginning of Q1, that eventually started on a very wet track. We didn’t miss some crashes either, such as those of Bradley Smith (who ran back to his pit lane and quickly started racing again on his second bike) and Thomas Lüthi, luckily with no serious consequences for the riders. Jordi Torres had to remain in the pit lane after falling during FP4 and fracturing the metacarpus of his left hand. His GP ends here, and he will also need a surgery to stabilize the fracture. In the meanwhile, the battle for accessing Q2 fired up on track with Alvaro Bautista and Aleix Espargaró that managed to get the last two places useful to race the second round of qualifying. Scott Redding was the first rider to be left out, soon after followed by Michele Pirro, while Franco Morbidelli ended up in the 19th position. Not a great qualifying round for Hafizh Syahrin, that wanted to get a good position in front of his local fans but couldn’t make it and will start from the bottom of the grid. 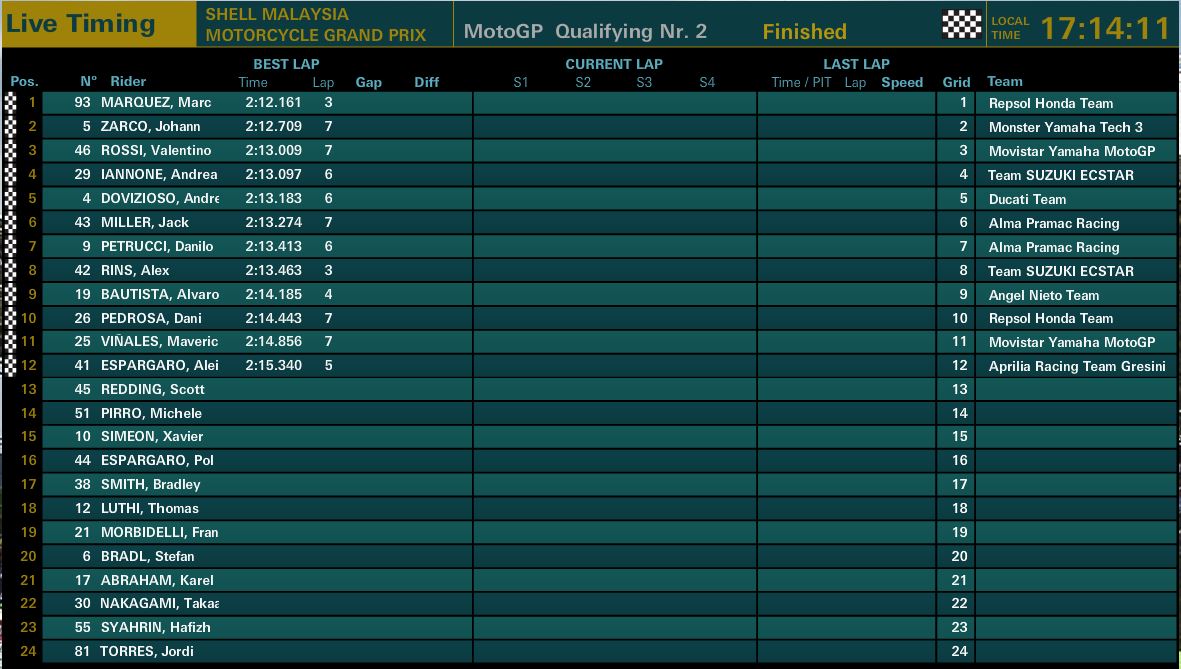