After the success in Race 1, Deniz Öncü gets another victory in the last race of the year. On the podium with him, Carlos Tatay and Ryusei Yamanaka.

Deniz Öncü couldn’t end better his 2018 in the Red Bull Rookies Cup: after his top result in Race 1, he can now add another victory to the list after the success in Race 2. Thanks to this result, he ends the season 2nd in the overall ranking. Carlos Tatay stepped on the podium again with an excellent 2nd place, Ryusei Yamanaka is 3rd.

The positions on the starting grid didn’t change and Artigas temporarily took the lead ahead of Deniz Öncü and Carrasco. But soon after the young riders, who have been racing very close to one another for the whole time, started a great battle for the top 3 positions. Pasquale Alfano ended his season with another 0: he fell during Race 1 and crashed again today, leaving the competition early for the second and last time.

One of the riders fighting for the podium, Carrasco, has been soon left behind as he slipped on one of the final turns. Nobody could keep up with Deniz Öncü today and he eventually finished his season with a double victory and the 2nd place in the overall RBRC ranking, just behind his brother Can, who had already won the Championship title in Misano. Carlos Tatay and Ryusei Yamanaka stepped on today’s podium too, winning over Yuki Kunii, Xavier Artigas, Steward Garcia, and Filip Salač. Can Öncü cross the finish line 8th followed by Sean Kelly and Peetu Paavilainen. 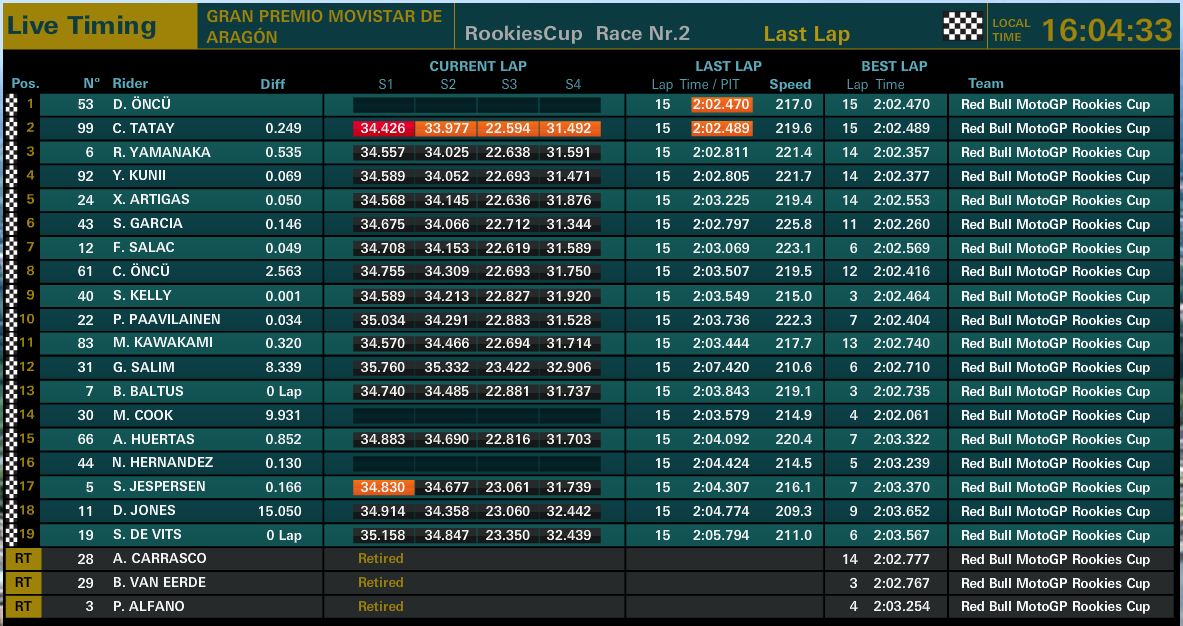 Red Bull Rookies Cup, Misano, Race: Can Öncü wins. He is the 2018 Champion