Most Important, World Superbike
May 27, 2018 by Bikeandrace
0

Race 2 at Donington Park was really one to remember, maybe the most exciting seen in the last couple of seasons. There were many overtakes and much hard battle involving Yamaha and Kawasaki riders, but the main reason why this race will not be forgotten easily is the fairytale of Michael van der Mark and Toprak Razgatlioglu. The Dutchmen won once again after triumphing in Race 1, but the young Turk surprised everyone by reaching second place after beating Jonathan Rea. Here’s what happened.

RECOVERY – Since they were 4th and 5th in Race 1, Alex Lowes and Lorenzo Savadori started from the first row together with Eugene Laverty. And this helped them a lot, because after a good start they remained first and second and Lowes went away after overtaking Savadori. In the meantime van der Mark, Jonathan Rea and Tom Sykes recovered from third row till reaching top 5 and van der Mark gave himself the task of closing the gap and reaching Lowes.

TOPRAK’S WONDER – What happened in the last laps is the fairytale of van der Mark and Razgatlioglu: the first went away and won, while Toprak went second after a great overtake on Lowes at the third-last lap and, especially, an amazing move on Jonathan Rea at Starkey’s Bridge. This way the young Sofuoglu’s “student” scored his first podium in World Superbike and this represents the best birthday present for Manuel Puccetti, who has just turned 41. The last spot on the podium went to Jonathan Rea, who managed to defend from Alex Lowes in the very last laps.

THE REST – Behind the top 4, Chaz Davies ranked fifth after a great recovery from fourth row and he was followed by Tom Sykes and Lorenzo Savadori (7th after being in top 3 during the first laps). Leon Camier, Jordi Torres and Loris Baz closed the top 10 and for Camier this represents a great performance after the bad rib injury suffered at Aragon one month and a half ago. 14th and 15th place for Luke Mossey and Bradley Ray, while Leon Haslam crashed at Melbourne Hairpin in the early stages after being in the front with Lowes, van der Mark and Savadori. 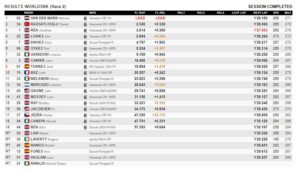