This weekend Misano World Circuit Marco Simoncelli is hosting the last 2018 World Superbike round before the long summer break, which will last two months and finish on 14th Sptember with Portuguese Round, taking place at Portimao. This is going to be a special weekend, also because Riviera di Rimini is hosting “Pink Night” on the same days.

By contrast, there’s nothing special in the classification of WorldSBK Free Practice 1, as Jonathan Rea topped the standings with one lap in 1’35.128. The reigning World Champion fought for early lead with his team-mate Tom Sykes and Chaz Davies, but midway the session he secured first place with one lap in 1’35.364 and then he went even faster few minutes before the chequered flag, when he rode in 1’35.128. Rea has still got some adrenaline in his body, following his superb Laguna Seca double, and he seems willing to repeat it in Italy…

Behind “Hannibal” Rea, Alex Lowes took second place in the final stages of the session with one lap in 1’35.263. The Brit Yamaha rider, who scored a very good podium finish in US Race 1, was just 63 milliseconds faster than Marco Melandri (1’35.326). Behind them, positive start for Leon Camier, who took Honda up to 4th place (1’35.484) and preceeded Tom Sykes and Chaz Davies.

The Czech rider broke his left collarbone during last weekend’s Alpe Adria round at Pannoniaring (Hungary) and this forced Guandalini Yamaha to search for another rider. Finally, they re-called Alessandro Andreozzi, who had already raced with the team from Bologna in last year’s final four rounds (from Portimao to Losail). 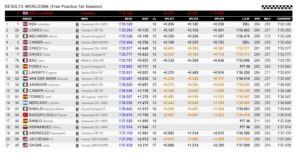