His fourth pole position in 2018 was an incredible one for Tom Sykes.

The Kawasaki Racing Team rider, 2013 World Superbike Champion, scored an amazing pole at Misano in the final stages of Superpole 2, when he performed a great lap in 1’33.640 and set the new pole record of Misano. The previous one, 1’33.662, was set last year by Sykes himself…Another thing to be remarked: since 2011, Sykes has always taken pole position at Misano every time it hosted a WorldSBK round (every year from then to today, except 2013).

By the way, the man to beat is still Jonathan Rea, who showed an incredible pace in the previous sessions. The Northern Irish was the fastest till Sykes’ final assault: at the beginning he rode in 1’34.467 and later he went down till 1’34.223, time that was deleted due to exceeding track limits. Finally Rea performed one lap in 1’33.673, just 33 milliseconds off Sykes. Rea is likely to escape and dominate Race 1, in any case.

The KRT duo will be joined in Race 1 first row by Eugene Laverty, who scored a consistent third place (1’34.281) on his Milwaukee Aprilia and beated Barni Ducati’s Xavi Forés by 8 hundreds of a second. Fifth place for other Aprilia rider Lorenzo Savadori, racing on home soil (he comes from Romagna), while Loris Baz took Althea BMW to sixth.

Third row for Aruba.it Ducati duo Chaz Davies–Marco Melandri and for MV Agusta’s Jordi Torres, the latter coming from Superpole 1 together with Michael van der Mark. The Dutchmen will start 11th behind Leon Camier and ahead of his team-mate in Pata Yamaha Alex Lowes. 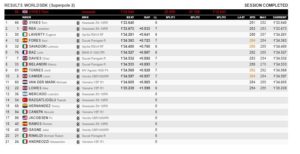 MotoGP, Aprilia presents its Savadori and Espargaro with their bikes