Most Important, Other categories, World Superbike
February 4, 2019 by Paolo Gozzi
0

Aruba.it Racing Ducati Team has unveiled this year’s bike, riders and livery today and we interviewed Stefano Cecconi (Aruba.it CEO) about the debut of Ducati Panigale V4 R and Álvaro Bautista. Here’s what he said. 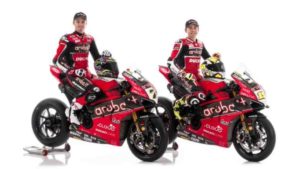 Álvaro Bautista is a rookie in Superbike and brakes, tyres and some circuits will be new to him. Ain’t it risky to bet on the Spaniard?

“Many riders went fast in both MotoGP and World Superbike in the past. Bautista scored just three podiums during his time in MotoGP, but we shouldn’t forget that he never rode frontrunning machines. Many people say that he won’t be as fast as Marco Melandri, but it’s a bit early to judge him. Anyway, he hasn’t been chosen by chance.”

What do you mean?

“When you must choose a rider, you need to consider many different aspects. Ducati knows everything about Bautista, they know how good he is. Gigi Dall’Igna (Ducati Corse General Manager, ed) is confident: he believes that Bautista will be very fast in World Superbike.  After all, he was a regular top-10 scorer on a private Ducati machine and they know very well how different it was from factory Ducati GP18.”

Everybody has big expectations about the debut of Ducati Panigale V4R. Doesn’t it scare you?

“Ducati V4 R is not a new version of an already existing bike, but something totally new. We’re not sure that our riders will adapt to it very quickly. For example, Chaz Davies was fast on our two-cylinder machine, but it doesn’t mean that he’ll be that fast on the V4 R. About Bautista, I don’t know whether he can be the best of the pack, but he knows the V4 engine: it’s similar to the one equipping Ducati GP15 and the GP15 is similar to the bike Bautista rode last year in MotoGP.”

What can you say about Chaz Davies?

“He’s part of the family and our fans love him. He’s won many races so far, but there’s still one step to be made. It’s the hardest one, but we strongly believe he can make it.”

Superbike: Álvaro Bautista “There’s still much work to be done”