The seventh 2018 Superpole went to…Mr. Superpole! Yes, because Tom Sykes scored his 44th pole position, after beating Troy Corser’s previous record at Donington Park. The 33-year-old guy from Huddersfield has also set the new pole record of Brno Circuit: his 1’57.687 time is three tenths faster than the previous record, set in 2012…by Tom Sykes himself!

Sykes rised in the very last moments of the session and before that, pole position was in the hands of Jonathan Rea. Rea went immediately first with one lap in 1’58.881 and then he rode one second faster (1’57.885) a little before the chequered flag. Once again an amazing job from the reigning World Champion, despite not being enough to grab the pole. In any case, Rea is still the one to beat on Brno track, since his pace looks great…

In Race 1 the Kawasaki Racing Team duo will be joined in first row by Marco Melandri. The Aruba.it Racing Ducati rider was just 14 milliseconds slower than Rea (1’57.899) and he was also the last one below 1’58. Behind him we’ll see Alex Lowes, Eugene Laverty and UK Round winner Michael van der Mark starting from the second row, while Chaz Davies will start from 9th place behind also Lorenzo Savadori and Loris Baz. Fourth-row start for Leon Camier, Michael Rinaldi and Yonny Hernandez, with the latter contesting Superpole 2 for the very first time, after passing SP1 together with Laverty.

Something more to be remarked is the performance of Toprak Razgatlioglu. The Turk rider, who was second in Race 2 at Donington, keeps struggling in Brno: his laptimes improved compared to Friday, but he couldn’t do more than 5th place in Superpole and so he will start 15th in Race 1. Many problems also for Barni Ducati’s Xavi Forés, who will start 13th with the only Ducati outside top 10. 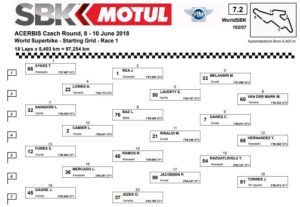