Most Important, Other categories, World Superbike
May 25, 2018 by Bikeandrace
0

World Superbike race weekend at Donington Park kickstarted with a wet FP1 session and it looks like the weather will be more or less the same till Sunday. In this case, it’s very important for the riders to get out on the track and better understand the conditions, since we’ll probably see the same situation also in both races.

Different conditions, but same leader: who ranked first in FP1 is Jonathan Rea. The reigning World Champion spent half an hour in the pits and then he joined the field on the track just 10 minutes before the chequered flag. He performed just six laps, but they were definitely enough to climb the ranking till the top. Tom Sykes was leading with a laptime of 1’44.793, which gave him more than one second of advantage on the rest, but in the final stages Rea performed one lap in 1’44.229 and so he went first.

Tom Sykes had to content with second place. The guy from Huddersfield was the real “King of Donington” after scoring four doubles in a row from 2013 to 2016, but last year he was defeated by Rea in Race 2 and the same would have happened in Race 1, if “JR” hadn’t crashed in the final stages due to a tyre issue. Sykes wants to take the UK Round crown back, but it will be very difficult…

Behind the KRT duo, convincing third place for Althea BMW’s Loris Baz, followed by comeback Leon Camier and good Leandro Mercado (often in first place in the first half of the session). Another rider who performed well is wildcard Niccolo Canepa, joining Alex Lowes and Michael van der Mark in Pata Yamaha at Donington and maybe also at Misano. The reigning Endurance World Champion with GMT94 Yamaha Team ranked sixth after being faster than Marco Melandri and his “team-mate for the weekend” Alex Lowes. PJ Jacobsen and Michael Rinaldi closed the top 10.

Leon Haslam ranked 11th on his Elf-coloured Puccetti Racing, while Aruba.it Ducati was 13th followed by wildcard Gino Rea. The ex-World Supersport and Moto2 rider is at Donington with the same OMG Racing Suzuki he rides in BSB and after being one of the best in the first part of the session he went down till 14th place.

17th place for Luke Mossey, replacing Yonny Hernandez in Pedercini Kawasaki (click here to read why). “NQ” is what you can read next to the names of other wildcards Mason Law (WD40 Kawasaki) and Bradley Ray (Buildbase Suzuki): the first ran just three laps, while Ray spent the whole session in the garage like also Ondrej Jezek and Michael van der Mark did. 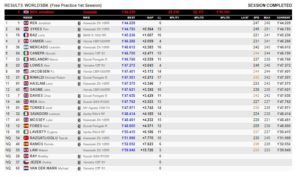 Superbike, Loris Baz will race in MotoAmerica for 2021 season

Buildbase Suzuki with Gino Rea and Danny Kent for BSB 2021