Most Important, World Superbike
May 25, 2018 by Alessandro Palma
0

Just 4 laps. It was enough for Jonathan Rea to rank first in FP2…before being beaten by his team-mate!

The rider from Ballymena took the lead in the early stages of the session with one lap in 1’39.239 and then he went to the pits. It looked like he could get another easy P1, but Tom Sykes performed a great lap in 1’38.593 during the second half of the session. Rea went out on the track to run some more laps and after improving his laptime by one tenth (1’39.106) he remained second behind the nine times Donington Race winner Sykes.

Behind the KRT duo, good step forward for Alex Lowes, who ranked third after being 8th in FP1. The Pata Yamaha rider was followed by Leon Camier, Loris Baz and Lorenzo Savadori. Difficult session for the Aruba.it Ducati pair Marco Melandri-Chaz Davies, who was 8th and 9th behind Xavi Forés and ahead of Gino Rea. The ex-World Supersport and Moto2 rider is contesting UK Round as a wildcard entry and after being already quite fast in FP1 he broke into the top 10 in the second session. 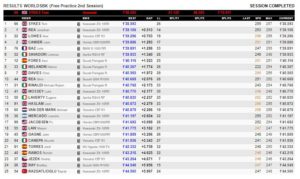 Superbike: “The signing of Álvaro Bautista is a calculated risk”