The World Superbike 2021 opens also for Team HRC. Here is the new CBR1000RR-R Fireblade by Alvaro Bautista and Leon Haslam.

Today Team HRC presented its new bike for this 2021 World Superbike season. The livery hasn’t changed from last year’s, with a lot of red and some blue and white parts. The name it’s the same too: CBR1000RR-R Fireblade. Honda confirmed also the riders, Leon Haslam and Alvaro Bautista, who will both ride the bike for the second year.

As HRC director, Tetsuhiro Kuwata, underlined: “The aim is to go beyond what we have already mastered in order to grow more“. There is a new entry in the team, the team manager Leon Camier, who last year was riding a bike in the championship. He said: “We can make a good step forward and also fight for the top positions“.

Leon Haslam commented: “I trained a lot this winter, on many different bikes. I have never been so fit. This year will be my second year with Honda and we will have a lot more data than last year, so I hope I can fight for the best positions from the first weekend“. He continued: “I can’t wait to ride the bike. During winter a lot of developments were implemented on the bike. I think we can really start challenging this season“.

Bautista said: “A strange off-season, very long” admitted the Spaniard. “But I trained a lot and even became a dad for the second time.” So more time with the family, before starting the tests that bring us closer to the new season. “There are no big changes on the bike, but a series of small changes. We have worked in many areas, especially electronics, and we are looking for a better rear grip. If it’s going to be a more ‘normal’ season, we could fight for better positions or maybe even win.” 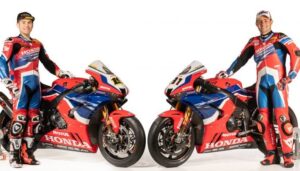