Most Important, Other categories, World Superbike
January 24, 2019 by Bikeandrace
0

The two days of testing held at Circuito de Jerez – Ángel Nieto saw four times World Champion Jonathan Rea topping the classification for what concerns Superbike Championship. The Northern Irish KRT rider set the pace on both 23rd and 24th January, as he managed to be few tenths faster than Pata Yamaha spearhead Alex Lowes. The two British riders were just slower than Honda MotoGP Test Rider Stefan Bradl, who was at Jerez before flying to Sepang for IRTA Test.

Rea and Lowes were followed by returning Leon Haslam and rookie Álvaro Bautista. The Spaniard coming from MotoGP constantly improved his performance on Ducati Panigale V4 R and it seems like he already has the pace to fight for the podium. Toprak Razgatlioglu finished the test in fifth place, followed by 2018 Supersport World Champion Sandro Cortese, who’s getting more and more speed on GRT’s Yamaha YZF-R1M. Michael van der Mark, Marco Melandri and Michael Ruben Rinaldi finished in seventh, eighth and ninth position.

Tenth place for Chaz Davies, as the Welsh Ducati rider suffered back pain following a crash sustained on Day 1. The Superbike classification was closed by Leandro Mercado, Eugene Laverty (at his first test on the Ducati V4 lined up by Team Go Eleven), Jordi Torres, BMW pair Tom Sykes-Markus Reiterberger and former Superstock 1000 rider Alessandro Delbianco, riding the only Honda CBR1000RR Fireblade SP2 seen at Jerez (the Moriwaki ones for Leon Camier and Ryuichi Kiyonari were tested at Buriram). 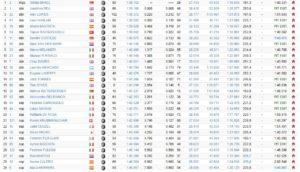 Superbike: “The signing of Álvaro Bautista is a calculated risk”

Superbike: Álvaro Bautista “There’s still much work to be done”