After triumphing in Race 1 following an overtake on Chaz Davies at Corkscrew, just some laps after the start, the reigning World Champion repeated this amazing performance in Race 2: after starting 9th due to reversed grid, Jonathan Rea overtook all his opponents lap after lap till reaching Eugene Laverty, who was then passed at the seventh lap.

Who finished second in both Race 1 and Race 2 is Chaz Davies. The Welsh, who topped Superpole, lost Saturday win after a mistake at Corkscrew and on Sunday he made his way to P2 after starting 8th. Davies finally had a positive weekend, after struggling a lot at Donington Park and Brno.

Alex Lowes scored his very first podium at Laguna Seca by ranking third in Race 1, while in Race 2 the last podium spot went to Eugene Laverty, who scored his first podium since when he came back to WorldSBK. Lowes’ team-mate Michael van der Mark finished 8th and 5th.

Among those who had a bad weekend, we cannot neglect Toprak Razgatlioglu: the Turkish rider suffered a big crash in Race 1, which prevented him from contesting Race 2 due to a left-foot injury. Double DNF due to crashes for both Lorenzo Savadori and PJ Jacobsen. 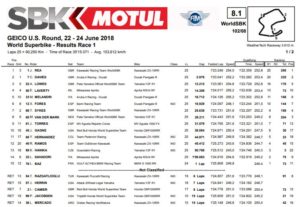 Superbike: Alex Lowes stops for three weeks because of an injury