Most Important, Other categories, World Superbike
January 29, 2019 by Alessandro Palma
0

2018 was a great year for Supersport 300 World Championship for what concerns female participation.

Alongside World Champion Ana Carrasco, last season we saw five more girls on the WorldSSP300 field, as the girl from Murcia and María Herrera were joined by wildcard entries Beatriz Neila (Aragon), Bibi Damen (Assen), Alexandra Pelikanova (Brno) and Steffie Naud (Magny Cours). Among the latter four riders mentioned, three will contest the full 2019 World Supersport 300 season: Neila will ride one of the Yamaha R3 machines of MS Racing team, while Naud and Pelikanova have been given a Kawasaki Ninja 400 respectively from Flembbo Leader Team and GP Project Team.

And what about Bibi Damen? The almost 18-year-old girl from Waalwijk had planned to spend one more year in German IDM Supersport 300 Championship, before reaching the world stage in 2020, but this will not come true in the end, because few days ago Damen announced her retirement from racing by sharing a post on her Facebook page. According to what she wrote, the main reason for this choice is lack of motivation, due to the many issues suffered by Damen during 2018 season. The Dutch girl took part in Internationale Deutsche Meisterschaft on a KTM RC390R machine lined up by family-run Bibi’s Racing Team, but technical problems stopped her at almost every round and she was often forced to miss races due to issues affecting her bike (in particular its engine or gearbox). 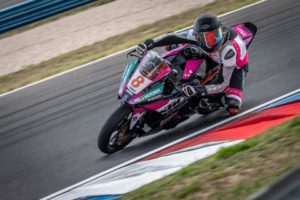 The only circumstance where she scored top-15 results in 2018 was at a Dutch Supersport 300 round taking place at Assen, during the same weekend as the MotoGP event. Last April, she contested the Supersport 300 World Championship round held in Assen, where she crossed the line in 29th position. Damen achieved the highest points of her career in 2016 and 2017, as she achieved some remarkable results in KTM RC Cup Benelux, including a few podium finishes, and scored points in the KTM RC Cup World Final held at Jerez (Spain). Previously, she raced in Arie Molenaar’s Honda NSF100 Cup and took part in Red Bull MotoGP Rookies Cup Selection Event.

Damen could have achieved much more in her career, thanks to her talent and the fact she’s still very young, but her motivation dropped to zero following a non-stop series of technical issues during 2018 and it seems like her decision was determined also by budget issues. This makes her decision more than understandable. Veel succes in de toekomst, Bibi!

Supersport 300: Rookie Victor Steeman “I hope to finish in the top 10”

Supersport 300: Adrien Quinet to ride a Honda in WorldSSP300