The first round of 2019 Supersport 300 World Championship will take place from 5th to 7th April at Motorland Aragon and so far 44 riders have announced their participation in the championship.

The first name standing out is Ana Carrasco. The reigning World Champion wants to retain the crown and this year she will compete with Provec Racing, the same team lining up Jonathan Rea and Leon Haslam in World Superbike. In addition to Carrasco, three more girls have joined WorldSSP300 after scoring great results last year: Spanish “craque” Beatriz Neila (who was fourth overall and first Yamaha rider in Spanish CEV RFME), Czech rising star Alexandra Pelikanova (boasting a podium and many top-10 finishes in European Supersport 300) and French talent Steffie Naud (who achieved many top-5 results in Coupe de France Promosport 400). While Pelikanova and Naud will ride Kawasaki machines (respectively with GP Project and Team Flembbo), Neila joined Yamaha MS Racing and will also compete in R3 bLU cRU Challenge.

For what concerns bLU cRU, the other riders involved in Yamaha Motor Europe’s project are Indonesian star Galang Hendra Pratama (who was re-selected after scoring great results last year), Andy Verdoia from France, Jacopo Facco and Kevin Sabatucci from Italy and Finn de Bruin from the Netherlands.

The field will include also Mika Pérez and Scott Deroue, who fought against Ana Carrasco for 2018 championship title. While Deroue will stay in MTM Racing Team, Pérez has left ParkinGO Kawasaki to join Scuderia Maranga Racing, with 2018 podium scorer Borja Sánchez as his team-mate.

Here’s the full list of the riders joining 2019 World Supersport 300 so far: 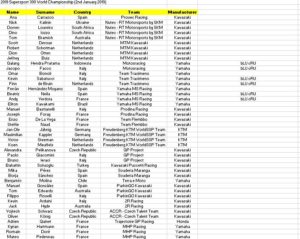 Supersport 300: Rookie Victor Steeman “I hope to finish in the top 10”